As Young As You Feel Day 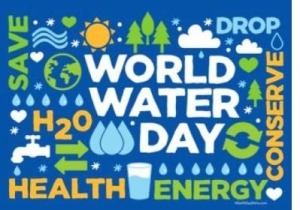 International Day of the Seal

871 – Battle of Marton: Æthelred of Wessex is defeated by a Danelaw Viking invasion force led by Halfdan Ragnarsson 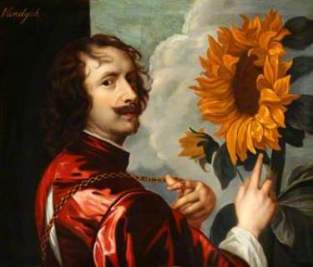 1615 – Katherine Boyle Jones born, Vicountess of Ranelagh, Irish scientific and political philosopher; member of the Hartlib Circle, a correspondence network which discussed and influenced issues of agricultural and scientific innovation, developments in mathematics and medicine, and educational reform, and the Great Tew Circle, a group concerned with literary and religious matters; her correspondence with her brother, chemist Robert Boyle, shows she had considerable impact on his work, and her notebooks show the results of her researches in medicine and chemistry

1630 – The Massachusetts Bay Colony outlaws possession of cards and dice

1712 – Edward Moore born, English playwright; The Foundling and The Gamester

1739 – Nader Shah occupies Delhi in India and sacks the city, taking riches of the royal treasury and the original Peacock Throne of the Mughal emperors as war trophies, along with thousands of women and children as slaves

1784 – The Emerald Buddha is moved to Wat Phra Kaew, Thailand

1808 – Caroline Sheridan Norton born, English author and social reformer. At 19, she married George Chapple Norton, barrister, M.P. for Guildford, and the younger brother of Lord Grantley, but he was jealous and possessive, often drunk and violent, and was mentally and physically abusive to her, which escalated as he became less and less successful as a barrister, and debts began to mount. But Caroline became a major society hostess, and it was her influence which secured for her husband the position of Metropolitan Police Magistrate in 1831. She wrote prose and poetry for solace and to earn money, publishing her poetry collections, The Sorrows of Rosalie and The Undying One, and two novels, which were well received, before she left her husband in 1836. Norton sued her close friend, Prime Minister Lord Melbourne, for ‘criminal conversation’ (a euphemism for adultery). The jury threw out the claim, but the scandal almost brought down the government, and Caroline was unable to get a divorce. She was also barred from seeing her children, who by English Law belonged to the father, and they were kept hidden from her by Norton. She at first lived on the income from her earnings as an author, but Norton successfully argued in court that as her husband, all her earnings were legally his. With no support from Norton, and her earnings confiscated, Caroline turned the law to her advantage by running up bills in her husband’s name, and telling the creditors to sue him if they wished to be paid. She became passionately involved in the campaigns to pass the Custody of Infants Act 1839, and the Matrimonial Causes Act 1857. When Parliament was debating reforming the divorce laws in 1855, she submitted to the members a detailed account of her marriage, and described the difficulties women faced under the existing laws. An English wife did not have the right to leave her husband. Not only could he sue her for restitution of “conjugal rights,” he could enter any house where she was staying and carry her off by force. If the husband sued for divorce the wife could not defend herself, or be represented by an attorney, or be considered a party to a suit between her husband and her supposed lover for “damages.” Only a man could divorce his wife on grounds of infidelity; a wife could not divorce her husband on those grounds, so matter how profligate he might be. Her intense campaigning was a substantial factor in the passage of these acts, and influenced passage of the Married Women’s Property Act 1870, because her story was widely known by Members of Parliament. These combined acts gave British wives a limited but separate legal identity from their husbands for the first time. Caroline Norton was not in favor of women getting the vote, and never espoused women’s equality. She simply wanted to earn her own living, and the right to be with her children 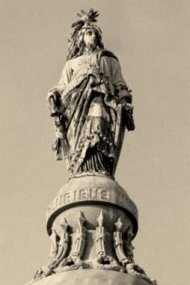 1822 – Ahmed Cevdet Pasha born, Ottoman sociologist, historian, statesman and jurist; Head of the Mecelle Commission, which issues the Civil Code of the Ottoman Empire in sixteen volumes of civil law; family law is left as the domain of Islamic religious law

1829 – In the London Protocol, the three protecting powers (United Kingdom, France and Russia) establish the borders of Greece

1873 – When petitions are brought to the Spanish National Assembly, it bans slavery in Puerto Rico * ; slave owners are given monetary compensation for each slave, but for the next three years slaves are still required to work for their former owners

1882 – In the U.S., the Edmunds Anti-Polygamy Act is signed into law, making polygamy a felony. The act also prohibited “bigamous” or “unlawful cohabitation” making them a misdemeanor, removing the need to prove that actual marriages had occurred. It also made it illegal for polygamists or cohabitants to vote, hold public office, or serve on juries

1895 –Auguste and Louis Lumiere show their first movie – the one-minute Employees Leaving the Lumiere Factory, generally regarded as the first public display of a movie projected onto a screen – to an invited audience in Paris

1899 – Ruth Page born, American ballerina and choreographer, began ballet lessons in 1919; first American to be accepted into the Ballets Russes; noted as choreographer for Frankie and Johnny (1938), The Merry Widow, Billy Sunday; combined opera and ballet in a school for young dancers

1902 – Madeleine Milhaud born, French actress and librettist for her husband’s operas, composer Darius Milhaud. They had to flee from Paris in 1940 when the Germans were about to invade, sailing to America with their son from Lisbon, but returned to France in 1946. She lived to the age of 105

1909 – Gabrielle Roy born, French Canadian author and teacher; highly regarded novelist; Bonheur d’occasion (published in English as The Tin Flute) won the 1947 Prix Femina, and the Royal Society of Canada’s Lorne Pierce Medal; other translated works include Streets of Riches, The Fragile Lights of Earth, and Children of My Heart.
Her words appear on the Canadian $20 bill: “Could we ever know each other in the slightest without the arts?” 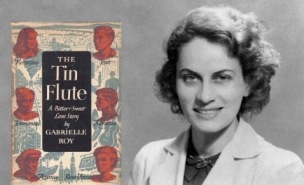 1912 – Agnes B. Martin born, in Canada, American abstract expressionist painter; awarded a National Medal of the Arts in 1998 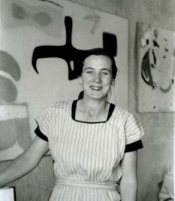 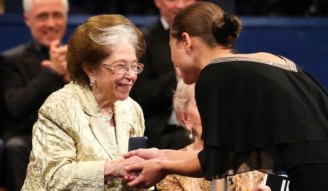 1920 – Katsuko Saruhashi born, Japanese geochemist, pioneer in measuring carbon dioxide levels in seawater, showing the evidence in seawater and the atmosphere of the dangers of radioactive fallout; after graduating from the Imperial Women’s College of Science in 1943, she went to work in the Geochemical Laboratory of the Meteorological Research Institute; in 1950, she began studying CO2 levels in seawater, having to develop her own measuring techniques for this new study; after the Bikini Atoll nuclear tests in 1954, the Japanese government asked the Geochemical Laboratory to analyze and monitor radioactivity in seawater and rainfall; Sarushashi’s study showed the radioactivity reached Japan in 18 months, and traces spread throughout the Pacific by 1969; her research was some of the earliest proving that the effects of fallout could spread over the entire globe, not just the immediate area of the blast; by the 1970s, she was studying acid rain

1934 – Sheila Morag Clark Cameron CBE QC  born, Dean of the Arches and Official Principal of the Arches Court of Canterbury (the senior ecclesiastical judge of the Church of England, 2000-2009), since 1983, Vicar-General of Canterbury

1941 – The Grand Coulee Dam in Washington state goes into operation

1945 – The Arab League is formed when a charter is adopted in Cairo, Egypt

1946 – Rivka Golani born, Israeli viola player and composer; her parents emigrated from Poland to Israel before she was born

1965 – Bob Dylan releases his first electric guitar album, Bringing It All Back Home

1966 – Pia Cayetano born, Filipino lawyer and politician;  youngest woman elected to the Senate in the Philippines (2004-2016); advocate for the rights of women and children; noted for pushing passage of the Responsible Parenthood and Reproductive Health Act of 2012; serving as a Representative and as Deputy Speaker of the House of Representatives of the Philippines, since 2016

1972 – U.S. Congress sends the Equal Rights Amendment to the states for ratification; it is ratified by 35 states, but falls three states short of the required 2/3 majority in order to be ratified

1976 – Reese Witherspoon born as Laura Reese Witherspoon, American actress, producer and supporter of women and children’s advocacy groups. Winner of an Oscar, a BAFTA, a Screen Actors Guild Award, and two Golden Globes. In 2016, Hello Sunshine was launched, Witherspoon’s joint venture with Otter Media to produce woman-character-driven films and television stories. She is a long-time supporter of Save the Children, and member of the board of the Children’s Defense Fund. She went to New Orleans after Hurricane Katrina as part of a 2006 CDF project to publicize the ongoing needs of the hurricane’s survivors. She is the honorary chair of the Avon Foundation, which supports breast cancer research and prevention of domestic violence

1982 – NASA’s Space Shuttle Columbia, is launched from the Kennedy Space Center on its third mission, STS-3

1990 – An Anchorage AK jury finds former tanker captain Joseph Hazelwood innocent of three major charges in connection with the Exxon Valdez oil spill, but convicts him of a minor charge of negligent discharge of oil

1992 – The Democratic Party of Albania wins a decisive majority in the parliamentary election, ending communism in Albania

1995 – Cosmonaut Valeri Polyakov returns to earth, after a record 438-days in space

2015 – U.S. Supreme Court hears arguments on whether the state of Texas can refuse to issue license plates showing the Confederate battle flag. The Texas division of the Sons of Confederate Veterans, backed by advocates from the American Civil Liberties Union, says banning the plates is a violation of free speech. Texas counters that license tags, unlike bumper stickers, are government speech, so they should not include a symbol many see as racist. In June 2015, the court rules 5-4 that Texas did not infringe on free speech because messages on state-issued plates are government speech, not private speech

Nona Blyth Cloud has lived and worked in the Los Angeles area for over 50 years, spending much of that time commuting on the 405 Freeway. After Hollywood failed to appreciate her genius for acting and directing, she began a second career managing non-profits, from which she has retired. Nona has now resumed writing whatever comes into her head, instead of reports and pleas for funding. She lives in a small house overrun by books with her wonderful husband.
View all posts by wordcloud9 →
This entry was posted in History, Holidays, On This Day and tagged Caroline Sheridan Norton, Gabrielle Roy, Jessie Sampter, Katherine Boyle Jones, Katsuko Saruhashi, Pia Cayetano, Reese Witherspoon. Bookmark the permalink.