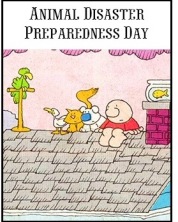 WWII –1945 Armistice celebrated in most European countries as Victory/Liberation Day or VE-Day, accompanied by Time of Remembrance and Reconciliation for Those Who Lost Their Lives during the Second World War *, which continues to May 9

Slovakia – Liberation of the Republic Day

453 BC – Battle of Jinyang: in the State of Jin on the Shanxi plateau, the rival houses of Zhao and Zhi end a protracted battle after allies from the Wei and Han houses change sides from the Zhi to the Zhao, and the House of Zhi is annihilated. This leads to the Tripartition of Jin between the three victors’ houses, during the early days of the Warring States period

413 – Emperor Honorius signs an edict providing tax relief for the Italian provinces Tuscia, Campania, Picenum, Samnium, Apulia, Lucania and Calabria, which had been plundered by the Visigoths 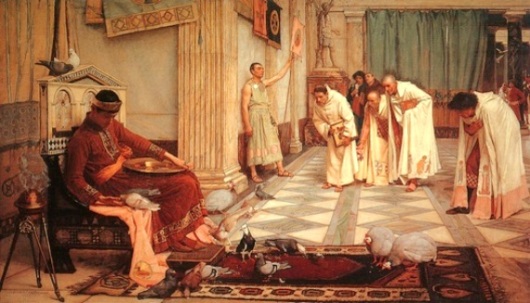 The Favorites of the Emperor Honorius, by John William Waterhouse – 1883

589 – Urged by Bishop Leander of Seville, Reccared I, Visigothic King of Hispania and Septimania (the Occitanie region of modern-day France), summons the Third Council of Toledo. He formally accepts a return from Arianism (sect that believes Christ, as the Son of God, is separate and subordinate to God, and allows clergy to marry) to the ‘true faith’ (Roman Catholicism), making it the state religion. Restrictions are placed on Jews, forbidding them to have Christian wives, concubines or slaves; existing children of such unions must be baptized; Jews are banned from any office in which they might have authority to punish Christians, and Christian slaves whom they had circumcised, or made to share in their rites, are ipso facto freed. Civil authorities are forbidden from “laying burdens” on clerics, or on slaves of the church or clergy. Wailing is banned at funerals, and on the eve of Saint’s days any dancing or songs deemed “indecent” are forbidden

1450 – English King Henry VI is a weak and unpopular ruler; corruption and high taxes to pay for years of warfare with France lead to an unsuccessful uprising by rebels from Kent and the surrounding counties; their undisciplined army, led by Jack Cade, marches on London, but they are forced back by denizens of the city in a bloody battle on London Bridge; considered a precursor to the Wars of the Roses 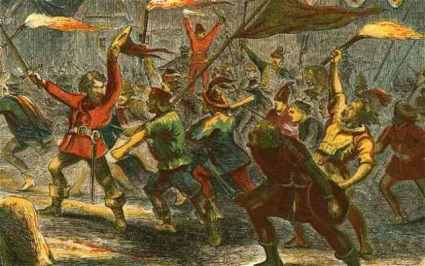 1737 – Edward Gibbon born, English historian and politician; The History of the Decline and Fall of the Roman Empire

1788 – The French Parliament is suspended, to be replaced by the creation of forty-seven new courts; it will be formally abolished in 1790

1794 – Antoine Lavoisier, ‘father of modern chemistry,’ is executed by guillotine during France’s Reign of Terror 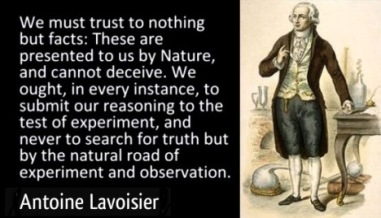 1821 – Greek War of Independence: Odysseas Androutsos, with his 120 Greek soldiers barricaded in the Gravia Inn, hold off 9,000 Ottoman Empire troops. After suffering heavy losses, the Turks pause to bring up their artillery, giving the Greeks a chance to slip away, escaping through Ottoman lines. The Turks are ultimately forced to retreat from the area

1828 – Henry Dunant born, founder of the International Committee of the Red Cross (ICRC) and recipient of the first Nobel Peace Prize

1829 – Louis Gottschalk born, American composer and pianist; initially, his application to the Paris Conservatoire was rejected without even hearing him play, the head of the piano faculty declaring, “America is a country of steam engines” but family friends aided him in getting an audition, and he was accepted. He traveled extensively in the U.S., the Caribbean, and South America, and his music is full of the melodies and rhythms of his native New Orleans and the countries he visited 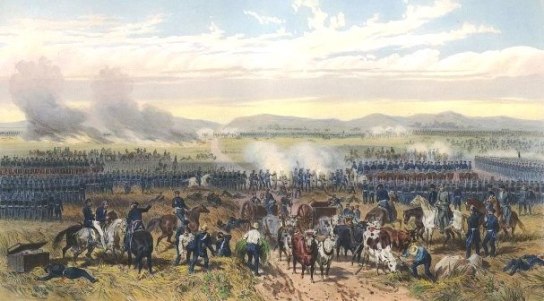 1865 – Dr. Mary Harris Thompson opens the Chicago Hospital for Women and Children because, of the two existing hospitals in Chicago, neither allowed women on staff, and one didn’t allow women patients. Thompson initially opens the hospital to treat widows and orphans of the Civil War

1867 – Margarete Böhme born, German novelist and autobiographer; her best-selling book, Tagebuch einer Verlorenen (The Diary of a Lost Girl),  the story of a woman forced by circumstances into a life of prostitution, created a sensation when it was published in 1905, at first anonymously, and remained in print until suppressed at the beginning of the Nazi regime

1899 – The Irish Literary Theatre in Dublin produces its first play, The Countess Cathleen by W.B. Yeats

1901 – The Australian Labor Party is established

1903 – Mary Henderson Stewart born, Baroness Stewart of Alvechurch; British Labour politician and educator; served in the Women’s Auxillary Air Force (WAAF) during WWII; magistrate in the juvenile courts, and later chair of the East London Juvenile Court; created a life peer and member of the House of Lords in 1975 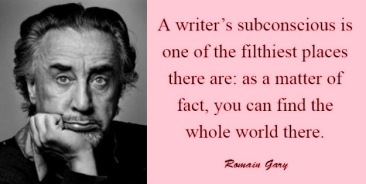 1919 – Edward George Honey, an Australian journalist using the pen name ‘Warren Foster,’ sends a letter to the London Evening News suggesting as a commemoration of the first anniversary of WWI Armistice Treaty, signed November 11, 1918: “Five silent minutes of national remembrance. A very sacred intercession. Communion with the Glorious Dead who won us peace, and from the communion new strength, hope and faith in the morrow…” at the “eleventh hour of the eleventh day of the eleventh month”

1925 – A. Philip Randolph organizes the Brotherhood of Sleeping Car Porters

1927 – Attempting to make the first non-stop transatlantic flight from Paris to New York, French war heroes Charles Nungesser and François Coli disappear after taking off aboard L’Oiseau Blanc (The White Bird) biplane. They have never been found. Twelve days later, Charles Lindbergh takes off, flying solo in the Spirit of Saint Louis

1929 – Ethel D. Allen born, African American physician and Republican politician; she described herself as a ‘ghetto practitioner” and made house calls in some of the poorest neighborhoods in Philadelphia. Concerned about the crime she saw daily, she ran for the Philadelphia City Council, and won after out-performing the incumbent in series of debates. She was the first black woman on the city council (serving the Fifth District 1972-1976, and then as an At-Large member 1976-1979); appointed as Secretary of the Commonwealth of Pennsylvania (1979). She died in 1981 from complications after double-bypass heart surgery

1929 – Miyoshi Umeki born in Japan, Japanese-American actress and singer; first Asian and the only Asian woman to win an Academy Award for acting, for her supporting role as Katsumi in Sayonara; also originated the role of Mei Li in Flower Drum Song on Broadway and in the 1961 film; operated a business with her husband renting editing equipment to film studios and college film departments

1932 – Julieta Campos born, Cuban-Mexican novelist, translator and politician; appointed as Secretary of Tourism for the Government of Mexico City in 2000; noted for El miedo de perder a Euridíce (The Fear of Losing Eurydice) 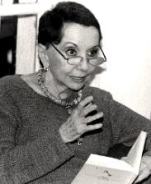 1933 – Mohandas Gandhi begins a 21-day fast of self-purification and launched a one-year campaign to help the Harijan movement, his name for the Dalits (‘Untouchables’) 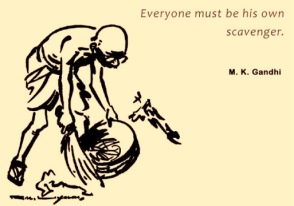 1943 – Pat Barker born, English novelist; her novel Union Street, featuring interlinked stories of seven working class women was rejected by publishers as “too depressing” until she submitted it to the feminist publisher Virago; noted for her WWI-based historical novels in The Regeneration Trilogy about the aftermath of trauma for British soldiers in the Great War, and her re-telling of the Trojan War, The Silence of the Girls 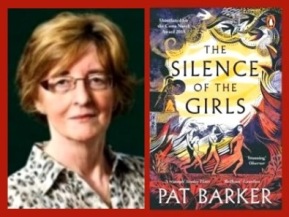 1945 – The Sétif massacre, a series of killings of Muslims around this Algerian market town by French authorities and European settlers. The death toll is much disputed – the French total is 1,020, while Radio Cairo reports 45,000 people killed

1945 – Janine Haines born, Australian Democratic politician, the second Leader of the Australian Democrats in Parliament, and first woman to be a federal parliamentary leader of an Australian political party (1986-1990); Australian Democrats Deputy Leader (1985-1986); Senator for South Australia (1981-1990); author of Suffrage to Sufferance: One Hundred Years of Women in Politics, published in 1992, which has been a prescribed text in many Australian universities and schools. She died in 2004 from a degenerative neurological condition, and was honoured with a state funeral 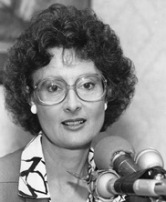 1945 – End of the Prague uprising, celebrated as Liberation Day * in the Czech Republic

1946 – Estonian schoolgirls Aili Jõgi (age 14) and Ageeda Paavel (age 15) blow up a wooden Soviet memorial erected in front of the Bronze Soldier of Tallinn, protesting the Soviet occupation authorities’ systematic destruction of memorials to the fallen in the 1918-1920 Estonian War of Independence, even the gravestones of the Tallinn Military Cemetery; they are later apprehended, and sent to forced-labor camps in the USSR, but are finally released after years of hardship and able to return home. In 1998, they become the only women awarded the Order of the Cross of the Eagle, as “freedom fighters of military merit” 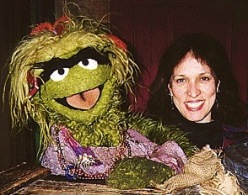 1962 –Rabindra Bharati University, a prominent University in India, is founded in Kolkata (Calcutta), in Western Bengal, on the centenary of poet Rabindranath Tagore 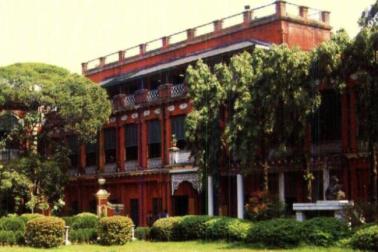 1963 – South Vietnamese soldiers under the Roman Catholic President Ngo Dinh Diem open fire on Buddhists defying a ban on the flying of the Buddhist flag on Vesak, the day honoring the birth and enlightenment of Buddha, killing nine unarmed civilians, and sparking the Buddhist crisis, a civil resistance by Buddhist monks, including sit-ins, hunger strikes and self-immolation. The majority of Vietnamese are Buddhists, and this led to the November 1, 1963, coup by Vietnamese Army generals overthrowing Diem

1970 – Naomi Klein born, Canadian nonfiction author, environmental and anti-capitalism activist; noted for No Logo; The Shock Doctrine; This Changes Everything: Capitalism vs. the Climate and On Fire: The (Burning) Case for a Green New Deal. In 2016, she was awarded the Sydney Peace Prize for her climate justice activism

1972 – U.S. President Nixon announces his order to place mines in major North Vietnamese ports in order to stem the flow of weapons and other goods to that nation

1973 – A 71-day standoff between federal authorities and the American Indian Movement (AIM) members occupying the Pine Ridge Reservation at Wounded Knee, South Dakota, ends with the surrender of the militants 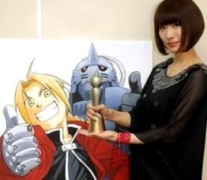 1977 – Kathrin Bringmann born, German number theorist, noted for her substantial contributions to the theory of mock theta functions; she was the Emmy Noether Lecturer of the German Mathematical Society in 2015 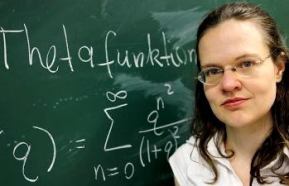 1980 – The World Health Organization (WHO) confirms the eradication of smallpox

1984 – The River Thames Flood Barrier opens, a moveable barrier in the river east of Central London 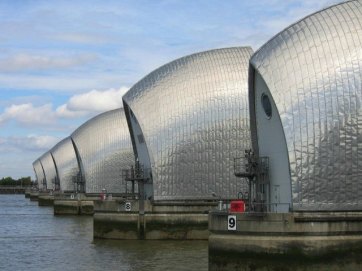 1999 – Nancy Macy becomes the first female cadet to graduate from The Citadel, the formerly all-male military school in South Carolina 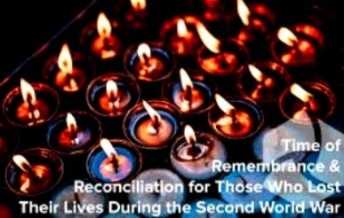 2016 – North Korea expelled BBC correspondent Rupert Wingfield-Hayes and his crew, who had arrived with a delegation of Nobel laureates, over their reporting. The country’s isolated communist government said Wingfield-Hayes was disrespectful of the nation’s leader, Kim Jong Un. He was questioned for eight hours and made to sign an apology. More than 100 foreign journalists received visas to enter the country for the duration of the first ruling Worker’s Party congress in 36 years, but they were blocked by authorities from directly covering the event, and had to use information from the propaganda-filled domestic news media, which is run by the state

Nona Blyth Cloud has lived and worked in the Los Angeles area for the past 50 years, spending much of that time commuting on the 405 Freeway. After Hollywood failed to appreciate her genius for acting and directing, she began a second career managing non-profits, from which she has retired. Nona has now resumed writing whatever comes into her head, instead of reports and pleas for funding. She lives in a small house overrun by books with her wonderful husband.
View all posts by wordcloud9 →
This entry was posted in History, Holidays, On This Day and tagged Antoine Lavoisier, David Attenborough, Julieta Campos, Margarete Böhme, Miyoshi Umeki, Naomi Klein, Romain Gary. Bookmark the permalink.
%d bloggers like this: