There are over 40 poets on the May birthday list, and I already knew the work of of 27 of them, and the names of several others, before I began to look them up.

So May is an outstanding month for the birth of poets. Is it the spring air?

Whatever the reason, I’ve decided to do round-ups of the poets born in each week of the month. It’s unlikely that all of them are My Kind of Poet, so some may not appear here, but it will be fun to see how many I can cover in four Fridays.

Sterling Allen Brown (1901-1989), was born on the campus of Howard University 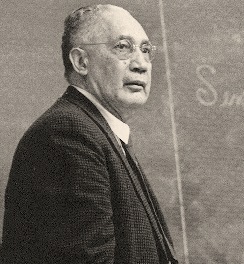 in Washington D.C., where his father, Sterling N. Brown, a former slave, was a prominent minister and professor at the Howard Divinity School. His mother Grace Adelaide Brown, valedictorian of her class at Fisk University, taught in D.C. public schools for more than 50 years. After earning a bachelor’s degree from Williams College, and a master’s degree from Harvard University, Sterling Brown was employed as a teacher at the Virginia Seminary and College in Lynchburg until 1926, where his interest in Southern Black dialect took root. Three years later, Brown began teaching at Howard University and in 1932 his first book, Southern Road, was published. The Depression made it hard to find a publisher for his next collection of poetry, so he concentrated on writing essays and on his career at Howard, where he taught until his retirement in 1969. He finally published his second book of poetry, The Last Ride of Wild Bill, in 1975.

This poem was published in Poetry magazine’s July 1938 issue. A more conventional poem than much of his other work, it contains few words from the black dialect he often used. The struggle of African American sharecroppers in the rural South to make ends meet still comes through very clearly.

With cotton to the doorstep
No place to play;
No time; what with chopping cotton
All the day.

In the broken down car
They jounce up and down
Pretend to be steering
On the way to town.

It’s as far as they’ll get
For many a year;
Cotton brought them
And will keep them here.

The spare-ribbed yard-dog
Has gone away;
The kids, just as hungry,
Have to stay.

In the two-roomed shack
Their mammy is lying,
With a new little brother
On her arm, crying.

Another mouth to feed
Another body to bed,
Another to grow up,
Underfed.

But their pappy’s happy
And they hear him say:
“The good Lord giveth,
And taketh away.

“It’s two more hands
For to carry a row;
Praise God from whom
All blessings flow.”

Thomas Kinsella (1928 – ) was born in Dublin. His father worked at the Guinness

brewery and was active in the union. Kinsella received grants and scholarships to attend University College in Dublin, where he studied physics and chemistry but took his degree in public administration. He began in the Irish civil service in 1946. In the early 1950s he met Liam Miller, the founder of the Doleman Press, which published much of Kinsella’s poetry, beginning in 1952. He rose to the civil service rank of assistant principal officer in the Department of Finance, but left the service in 1965 to become an artist-in-residence at Southern Illinois University. In 1970, he became a professor of English at Temple University, a position he held until 1990. In the end, he was teaching one semester a year at Temple, spending the rest of the year in Dublin running the Peppercanister Press, his private press, founded as Kinsella says, “with the purpose of issuing occasional special items.” In 1976, Kinsella started Temple University’s School of Irish Tradition in Dublin. Since his retirement from teaching in 1990, he has continued his direction of Peppercanister Press, as well as the Dolmen and Cuala Presses, all in Dublin.

This poem is for those of us who are on the far side of forty, when the face we see in the morning’s mirror isn’t quite the one we’re expecting.

The day dawns, with scent of must and rain,
Of opened soil, dark trees, dry bedroom air.
Under the fading lamp, half dressed – my brain
Idling on some compulsive fantasy –

I towel my shaven jaw and stop, and stare,
Riveted by a dark exhausted eye,
A dry downturning mouth.

It seems again that it is time to learn,
In this untiring, crumbling place of growth
To which, for the time being, I return.
Now plainly in the mirror of my soul
I read that I have looked my last on youth
And little more; for they are not made whole
That reach the age of Christ.

Below my window the wakening trees,
Hacked clean for better bearing, stand defaced
Suffering their brute necessities;
And how should the flesh not quail, that span for span
Is mutilated more? In slow distaste
I fold my towel with what grace I can,
Not young, and not renewable, but man. 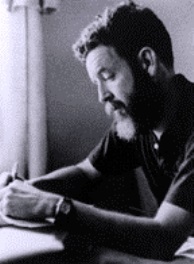 from Vanderbilt University in 1935. While at Vanderbilt, he edited the student humor magazine The Masquerader, was captain of the tennis team, made Phi Beta Kappa and graduated magna cum laude. He studied there under  Robert Penn Warren, who first published Jarrell’s criticism; Allen Tate, who first published Jarrell’s poetry; and John Crowe Ransom, who gave Jarrell his first teaching job as a Freshman Composition instructor at Kenyon College in Gambier, Ohio. Jarrell taught English at Kenyon for two years, where he met and became friends with the poet Robert Lowell, then taught at the University of Texas at Austin until 1942, when he joined the U.S. Army Air Force. His war-time experiences were the subject of much of his early poetry. After the war, he joined the faculty of Sarah Lawrence College, and served as a temporary book review editor for The Nation magazine. He disliked living in New York, and became an associate professor at the Woman’s College of the University of North Carolina.He moved to Washington DC in 1956 when he was appointed as the Consultant in Poetry for the Library of Congress (later re-titled Poet Laureate), then returned to Greensboro. As Jarrell approached his fiftieth birthday, he became very depressed, and a psychiatrist prescribed an antidepressant, but it made him manic and he was hospitalized. Then he went through cycles of depression, exacerbated by a vicious review in the New York Times Review of Books of his poetry collection The Lost World. He was struck and killed by a car in 1965, causing persistent rumors that he had committed suicide, but the official verdict was accidental death.

One of the most unusual themes in Jarrell’s poetry appears in several poems he wrote as if seeing through the eyes of an older woman. His own struggle with depression gave him empathy with women who feel their age makes them invisible in our society’s youth-obsessed culture.

Moving from Cheer to Joy, from Joy to All,
I take a box
And add it to my wild rice, my Cornish game hens.
The slacked or shorted, basketed, identical
Food-gathering flocks
Are selves I overlook. Wisdom, said William James,

Is learning what to overlook. And I am wise
If that is wisdom.
Yet somehow, as I buy All from these shelves
And the boy takes it to my station wagon,

What I’ve become
Troubles me even if I shut my eyes.
When I was young and miserable and pretty
And poor, I’d wish
What all girls wish: to have a husband,
A house and children. Now that I’m old, my wish
Is womanish:
That the boy putting groceries in my car

See me. It bewilders me he doesn’t see me.
For so many years
I was good enough to eat: the world looked at me
And its mouth watered.  How often they have undressed me,
The eyes of strangers!
And, holding their flesh within my flesh, their vile

Imaginings within my imagining,
I too have taken
The chance of life.  Now the boy pats my dog
And we start home.  Now I am good.
The last mistaken,
Ecstatic, accidental bliss, the blind

Happiness that, bursting, leaves upon the palm
Some soap and water–
It was so long ago, back in some Gay
Twenties, Nineties, I don’t know . . . Today I miss
My lovely daughter
Away at school, my sons away at school,

My husband away at work–I wish for them.
The dog, the maid,
And I go through the sure unvarying days
At home in them.  As I look at my life,
I am afraid
Only that it will change, as I am changing:

I am afraid, this morning, of my face.
It looks at me
From the rear-view mirror, with the eyes I hate,
The smile I hate.  Its plain, lined look
Of gray discovery
Repeats to me: “You’re old.”  That’s all, I’m old.

And yet I’m afraid, as I was at the funeral
I went to yesterday.
My friend’s cold made-up face, granite among its flowers,
Her undressed, operated-on, dressed body
Were my face and body.
As I think of her I hear her telling me

How young I seem; I am exceptional;
I think of all I have.
But really no one is exceptional,
No one has anything, I’m anybody,
I stand beside my grave
Confused with my life, that is commonplace and solitary. 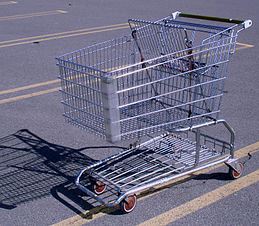 Ariel Dorfman (1942 – ) was born in Buenos Aires, Argentina, the son of Adolf 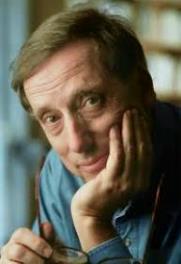 Dorfman from Odessa, Ukraine, a prominent Argentine professor of economics and the author of Historia de la Industria Argentina, and Fanny Zelicovich Dorfman, from a family of Romanian-Moldovan Jews. The Dorfman family moved to the United States when he was a baby, and then to Chile in 1954. He attended and then taught at the University of Chile in Santiago. From 1970 to 1973 Dorfman served as a cultural adviser in the administration of Salvador Allende, Chile’s first socialist president, whom the U.S. government actively opposed. In September 1973, Allende’s democratically elected government was violently overthrown in a military coup that put the dictator General Augusto Pinochet in power. Dorfman was forced into exile, living and writing in the United States until the restoration of Chilean democracy began in 1990. In 1985 he began teaching literature and Latin American studies at Duke University. Dorfman writes in both Spanish and English. He is best known for his novels and plays, including his award-winning play, Death and the Maiden, but has also written nonfiction, and published three collections of poetry.

who’s that man with
Uncle Roberto?

why doesn’t daddy ever come
to see me?

is daddy dead?
is that why
he never comes home?

so I tell her the only thing

So four very different May poets. What connects them, other than their month of birth?

Loss. Through lack of opportunity, ageing, death, or political upheaval, loss is the common thread that runs through each of these poems.

Nona Blyth Cloud has lived and worked in the Los Angeles area for the past 50 years, spending much of that time commuting on the 405 Freeway. After Hollywood failed to appreciate her genius for acting and directing, she began a second career managing non-profits, from which she has retired. Nona has now resumed writing whatever comes into her head, instead of reports and pleas for funding. She lives in a small house overrun by books with her wonderful husband.
View all posts by wordcloud9 →
This entry was posted in Poetry, Word Cloud and tagged Ariel Dorfman, May Poets, Mayhappenstance, Randall Jarrell, Sterling Allen Brown, Thomas Kinsella. Bookmark the permalink.
Loading Comments...
%d bloggers like this: