589 BC – Nebuchadnezzar II of the Neo-Babylonian Empire invades the Kingdom of Judah, which had stopped paying tribute to him, and lays siege to Jerusalem for over a year, then finally breaks through the city’s walls, plunders Jerusalem, destroys Solomon’s Temple, and razes the city to the ground

1249 – Alexander III, aged seven, is crowned King of the Scots at Scone; after a bitter factional struggle over control during his minority, he ruled from age 21 until he broke his neck falling from his horse while traveling during a storm at night in 1286

1527 – John Dee born, Welsh-English astronomer, mathematician and magus; Court Astrologer of Queen Elizabeth I; leading expert in navigation who trained many of the explorers who made England’s voyages of discovery

1713 – First performance of George Frideric Handel’s Te Deum and Jubilate, written to celebrate the Treaty of Utrecht, which ended the War of the Spanish Succession

1787 – The Continental Congress enacts the Northwest Ordinance establishing governing rules for the Northwest Territory, which includes Ohio, Indiana, Illinois, Michigan, Wisconsin and Minnesota.  The ordinance also establishes procedures for the admission of new states, sets precedent concerning public domain lands, and limits the expansion of slavery, but allows for “indentured servitude”(slaves could be brought into the territory, but not bought or sold there) and reclaiming fugitive slaves 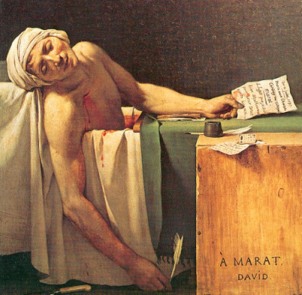 Death of Marat by Jacques-Louis David – 1793

1812 – The first pawnbroking ordinance was passed in New York City

1814 – The Carabinieri, the national gendarmerie of Italy, is established

1821 – Nathan Bedford Forrest, Confederate Civil War cavalry general, noted for his ruthless guerilla raids; a contemporary described him as “insensible to fatigue, incapable alike of sympathy or fear . . . a consummate horseman and a dead shot with the pistol . . . His control over his men is absolute . . . with his officers he is often exacting and savage . . .” After the war, he became the first Grand Wizard of the Ku Klux Klan, and turns its loose collection of local groups into a force to suppress voting rights for freedmen and Republicans in the South with intimidation and force during the election of 1868, but resigned the next year, and later claimed he had never been a member

1863 – Rioting against the Civil War military draft erupts in New York City; over three days, at least 1,000 people are killed

1863 – Margaret Alice Murray born, British Egyptologist, anthropologist, folklorist and feminist. First woman to be appointed as a lecturer in archaeology in the UK, at London’s University College (1898-1935) Worked closely with Sir Flinders Petrie in Egyptology as his copyist-illustrator and assistant, discovering the Osireion temple at Abydos. Petrie gave her full credit for her work, but she encountered male prejudice from others, and joined the Women’s Social and Political Union (WSPU), as well as mentoring several promising women students. She also published books on Egyptology for the general public. In later years, Murray got into academic hot water over her theories about Christian witch hunts and witch cults 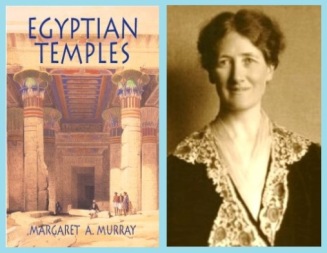 1875 – June Etta Downey born, American psychologist; first woman in the U.S. to head an academic department, founder of the psychology laboratory at the University of Wyoming in 1900. Her work in psychology gained national recognition and led to many changes in the field. Noted for Downey Will-Temperament Tests, her studies of the psychology of aesthetics and related philosophical issues, and personality assessment

1889 – Emma Asson born, Estonian politician, educator and author, one of the first women elected to the Estonian parliament, contributed to the first constitution of Estonia especially in regards to education and gender equality, wrote the first textbook in the Estonian language 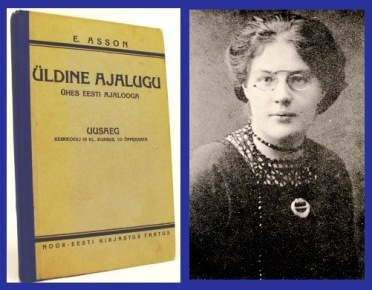 1913 – Kay Linaker born, American actress, and screenwriter under the name Kate Phillips. Best known as an actress for her supporting role in Kitty Foyle, and as the co-author with Theodore Simonson of The Blob, the low-budget science fiction-horror movie that was Steve McQueen’s feature film debut. During WWII, she wrote for the Voice of America, and volunteered for the Red Cross. She died in 2008 at the age of 94 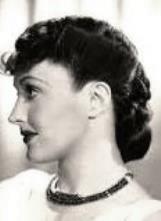 1918 – Marcia Brown born, American author and illustrator, recipient of three Caldecott Medals, in 1955 for Cinderella, or the Little Glass Slipper; 1962, for Once a Mouse; and in 1983 for Shadow. She also won the American Library Association’s Laura Ingalls Wilder Medal for her contributions to children’s literature

1927 – Simone Veil born, French lawyer and politician; she championed the 1975 law that legalized abortion in France. Veil served as the French Minister of Justice (1956-1974), and as the Minister of Health (1993-1995). She was the first woman chosen as President of the European Parliament (1979-1982 – was a member of the EP until 1993), and served as a member of the Constitutional Council of France (1998). A Jewish survivor of Auschwitz-Birkenau and Bergen-Belsen, she lost her parents and a brother in the Holocaust

1934 – Wole Soyinka born, Nigerian Yoruba playwright, poet, novelist, and essayist; in 1986, he was the first African to be honored with the Nobel Prize for Literature; noted for his plays, especially A Dance of the Forests and The Strong Breed; his poetry collections, including Ogun Abibiman; and his memoir, You must Set Forth at Dawn 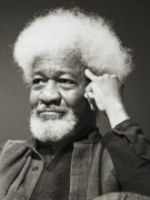 1935 – Monique Vézina born, Canadian politician who retired from public service but remained active in the field of international development; a Quebec nationalist, she served as a Progressive Conservative Parliament member, appointed as Minister of External Relations, and Minister responsible for La Francophonie, Minister for Employment and Immigration, and several other offices.

1939 – Frank Sinatra makes his first recording, with the Harry James band – the songs are “Melancholy Mood” and “From the Bottom of My Heart”

1948 – Catherine Breillat born, French filmmaker and novelist; her second film, Une Vraie Jeune Fille (A Real Young Girl), based on her novel Le Soupirail, was banned after its premiere until 1999; in 2004, just months after suffering a stroke which left her partially paralyzed, she went back to work on her film, Une vieille maîtresse (The Last Mistress), one of three French films officially selected for the 2007 Cannes Film Festival

1954 – France, Great Britain and U.S. reach an accord which splits Vietnam in two

1959 – The Shirelles release “Dedicated To The One I Love”

1961 – Tahira Asif born, Pakistani Muttahida Qaumi Movement politician; member of the National Assembly of Pakistan from 2013 until her assassination in June, 2014, by two armed men, while traveling with her daughter and driver in Lahore. Ataf Hussain, the head of MQM, her political party, said the assassins were religious extremists, and that Asif had not been provided with adequate security

1966 – Natalia Luis-Bassa born, Venezuelan conductor who now works in England; Musical Director of the Wellington College Symphony Orchestra and the Hallam Sinfonia; also works with the National Children’s Orchestra of Great Britain; she was the first person to earn a degree in Orchestral Conducting in Venezuela, and former music director of the Orquesta Sinfónica de Falcón

1985 – Live Aid concert in London, seen in Philadelphia, and other cities raises over $70 million for African famine relief

1995 – NASA’s space shuttle Discovery launches, after almost a month’s delay, due to replacement needed after extensive damage by woodpeckers over the Memorial Day weekend to the foam insulation of Discovery’s external tank

2013 – George Zimmerman is found ‘not guilty’ of killing Trayvon Martin

Nona Blyth Cloud has lived and worked in the Los Angeles area for the past 50 years, spending much of that time commuting on the 405 Freeway. After Hollywood failed to appreciate her genius for acting and directing, she began a second career managing non-profits, from which she has retired. Nona has now resumed writing whatever comes into her head, instead of reports and pleas for funding. She lives in a small house overrun by books with her wonderful husband.
View all posts by wordcloud9 →
This entry was posted in History, Holidays, On This Day and tagged Fuziah Salleh, George Frideric Handel, John Dee, Margaret Alice Murray, Natalia Luis-Bassa, Simone Veil, Wole Soyinka. Bookmark the permalink.
%d bloggers like this: