169 BC – A menorah is lit to rededicate the Holy Temple of Jerusalem  after two centuries of foreign rule, religious oppression and a seven-year revolt. The legend that the menorah burns for eight days with only one day’s worth of oil is celebrated during the eight days of the Jewish holiday Hanukkah

484 – Alaric succeeds his father Euric as king of the Visigoths, in southern Gaul

1065 – Westminster Abbey is consecrated under Edward the Confessor 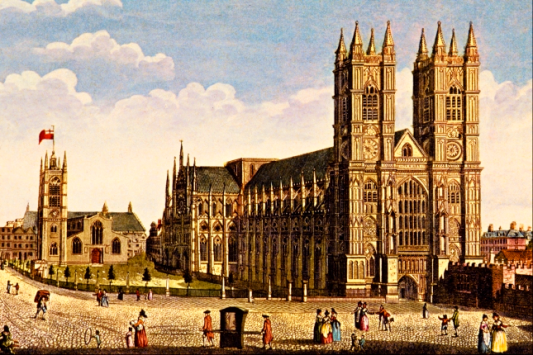 1522 – Margaret of Parma born, illegitimate but acknowledged daughter of Holy Roman Emperor Charles V; appointed by her half-brother Philip II of Spain as Governor of the Netherlands (1559-1567), she resigned when it became clear that her authority would be less than that granted to the Duke of Alba, sent to put down by force northern Dutch opposition to Philip’s religious oppression, in spite of her warnings that military intervention would be disastrous

1722 – Eliza Lucas Pinckney born in the British West Indies, educated in French music and botany, a subject at which she excelled; when her family moved to South Carolina, she became an overseer on one of her family’s plantations, and kept a record of her decisions and experiments; as a result, Indigo became one of the South’s major cash crops, its cultivation and processing as dye would produce one-third of South Carolina’s exports before the Revolutionary War

1789 – Catharine Maria Sedgwick born, American novelist and short story writer who earned her living with her pen; noted for her spirited heroines, and her promotion of  the idea of American mothers as custodians and transmitters of republican ideals, civic virtue and patriotism, advocating for the education of women, but only in order to make them better mothers and wives; her books include Hope Leslie, which encouraged religious tolerance and fair treatment for American Indians 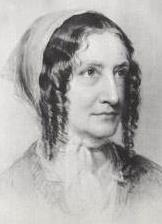 1798 – Thomas James Henderson born, Scottish astronomer-mathematician; first Astronomer Royal for Scotland; first to measure the distance to Alpha Centauri, and first to determine the parallax of a fixed star

1836 – South Australia is proclaimed as an Australian state, with Adelaide as its capital

1842 – Calixa Lavallée born, French-Canadian composer who served as a Union Army band member during the U.S. Civil War, and composed the music for O Canada, the national anthem of Canada

1871 – Frederick Pethick-Lawrence born, British Labor politician, socialist-conscientious objector-women’s rights activist; as Secretary of State for India and Burma, he was much involved in negotiations for India’s independence

Frederick and Emmeline Pethick Lawrence, at home in Surrey

1873 – William Draper Harkins born, American chemist who first proposed the principle of nuclear fusion, which led to the development of the H-bomb

1882 – Arthur Eddington born, English astrophysics pioneer who popularized science; his articles on Einstein’s theory of general relativity were the first written in English; the natural limit to the luminosity of stars is named the Eddington Limit in his honor

1882 – Lili Elbe born as Einar Magnus Wegener, Danish painter, and a pioneering transgender woman, who underwent sex reassignment surgery in 1930, but died from complications caused by an attempted uterus transplant in 1931

1894 – Burnita Shelton Matthews born, American judge; the first woman appointed to serve on a U.S. district court, as Judge of the U.S. District Court for the District of Columbia (1949-1968). During World War I, she moved to Washington, DC, took the civil service exam, and worked at the Veterans Administration. She enrolled in night school of at National University Law School (now George Washington University Law School). She earned her degree and passed the District of Columbia bar in 1920. As a young law student in DC, she staged a silent vigil after learning she could carry a banner outside White House but would be arrested for not having a permit if she spoke. Worked as counsel for the National Woman’s Party; President Truman appointed her a Federal District Court Judge (1949)

1895 – The Lumière brothers, filmmaking pioneers who patented the cinematograph,  show their series of under-a-minute films to a paying audience at the Grand Cafe in Boulevard des Capucines – the debut of the cinema

1898 – Carl-Gustaf Rossby born, Swedish-American meteorologist, study of fluid mechanics in weather, identified the Jet Stream and the long waves in the westerlies named the Rossby Waves in his honor

1918 – Constance Markievicz, Irish revolutionary nationalist, socialist and feminist, while detained in Holloway prison for making a seditious speech, became the first woman to be elected MP to the British House of Commons. As a member of Sinn Féin, she declined to take her seat after being released as part of their abstentionist strategy

1934 – Maggie Smith born, English actress, Academy award winner for The Prime of Miss Jean Broody, and Best Supporting for California Suite; Professor McGonagall in the Harry Potter films, and Violet Crawley in Downton Abbey. Smith offered her support for raising the $4.6 million needed to help rebuild the Court Theatre in Christchurch, New Zealand, after the earthquake in 2011 that caused severe damage to the area. In 2012, she became a patron of the International Glaucoma Association. In 2012, she contributed a drawing of her own hand to the 2012 Celebrity Paw Auction, to raise funds for Cats Protection

1944 – Sandra M. Faber born, American astrophysicist known for research on the evolution of galaxies, making important discoveries linking the brightness of  galaxies to the speed of their stars; co-discoverer of the Faber-Jackson relation, an empirical power-law relation; worked on the design of the Keck observatory and telescopes in Hawaii; awarded the National Medal of Science in 2013

1946 – Barbara Thomas Judge, Lady Judge, born in the U.S., has dual British-American citizenship; first female Chairman of the Institute of Directors; Chairman Emeritus of the UK Atomic Energy Authority (UKAEA); Chairman of the United Kingdom’s fraud prevention service Cifas; former Chairman of the Pension Protection Fund and a UK Business Ambassador on behalf of UK Trade & Investment; also a trustee of several cultural and charitable institutions, including the Royal Academy of Arts

1954 – Gayle King born, American television journalist; co-anchor of CBS This Morning since 2012, and editor-at-large for O, The Oprah Magazine

1973 – The Endangered Species Act * is passed in the United States

1973 – Aleksandr Solzhenitsyn publishes Gulag Archipelago, an exposé of the Soviet prison system; he spent eight years in prison for writing derogatory comments in private letters about Joseph Stalin and his regime

1981 – Elizabeth Jordan Carr, first American test-tube baby, is born in Norfolk VA; a journalist, she is the editor of Daybreak.com, and has worked for newspapers in Maine, and for the Boston Globe

1989 – Alexander Dubcek, who was expelled from the Communist Party in 1970, is elected speaker of the Czech parliament

1995 – German prosecutors, investigating pornography, pressure CompuServe to set a precedent by blocking access to sex-oriented newsgroups for its Internet customers

2009 – In a civil ceremony, two men in Argentina became the first same-sex couple to legally marry in South America

2012 – The first Short Film Day * is launched in France, and has now spread throughout Europe, a celebration of the diversity of short films

2017 – A U.S. judge permanently blocked an ethnic studies ban in Arizona public schools, finding it racially motivated. The controversial law dismantled a popular Mexican-American studies program, triggering a seven-year court fight. U.S. District Judge A. Wallace Tashima’s final judgment bars Arizona education officials from enforcing the 2010 law, which was passed in the same year as the state’s landmark immigration crackdown. Tashima wrote in his decision that the law “was enacted and enforced, not for a legitimate educational purpose, but for an invidious discriminatory racial purpose, and a politically partisan purpose,” and therefore “cannot be enforced.” Attorneys for the state denied racial discrimination was behind the law, and said they were considering an appeal 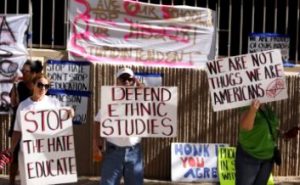 Nona Blyth Cloud has lived and worked in the Los Angeles area for the past 50 years, spending much of that time commuting on the 405 Freeway. After Hollywood failed to appreciate her genius for acting and directing, she began a second career managing non-profits, from which she has retired. Nona has now resumed writing whatever comes into her head, instead of reports and pleas for funding. She lives in a small house overrun by books with her wonderful husband.
View all posts by wordcloud9 →
This entry was posted in History, Holidays, On This Day and tagged Aleksandr Solzhenitsyn, Eliza Lucas Pinckney, Eliza Pinckney, F. W. Murnau, Frederick Pethick-Lawrence, Mariam Aleem, Martha Wash. Bookmark the permalink.
%d bloggers like this: