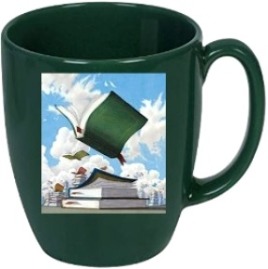 The world was a terrible place, cruel, pitiless, dark
as a bad dream. Not a good place to live. Only in books
could you find pity, comfort, happiness – and love.
Books loved anyone who opened them, they gave
you security and friendship and didn’t ask anything
in return; they never went away, never, not even
when you treated them badly.

Today is Read Across America Day, which was started in 1998 by the National Education Association (NEA) to encourage and celebrate reading at any and every age.

It was my ambition as a child to live in a library, and I’ve pretty much achieved that – there are multiple bookcases in every room of the house except the bathroom and the kitchen, which has a few essential cookbooks. My husband prefers non-fiction and books about his various hobbies and interests, while I love poetry, and fiction in all its forms, so our collections cover a wide range of subject matter. Years ago, our friend and neighbor had returned to school for her masters, and found much of her research material on our shelves, saving her endless trips to her college’s library. Her master’s thesis was titled “Chaucer’s Use of Chess Terminology: A Stylistic Analysis.” Of course, she had also had the advantage of picking my husband’s fertile brain about a pastime which had enlivened many of his leisure hours, and his interest in language development.

These days, I do more research online than with book in hand, but reading for pleasure is still as indispensable as ever. So in honor of this day, here are some poems from other book-lovers, who happen to also be notable authors and poets.

that is me rushing to the window
to see if it’s you passing under the shade trees
with a baby carriage or a dog on a leash,
me picking up the phone
to imagine your unimaginable number,
me standing by a map of the world
wondering where you are—
alone on a bench in a train station
or falling asleep, the book sliding to the floor.

Billy Collins (March 22, 1941 – ) dubbed “the most popular poet in America” by Bruce Weber in the New York Times, was a two-term U.S. Poet Laureate (2001-2003), and has published many poetry collections, including Questions About Angels, The Art of Drowning and Nine Horses: Poems. It was Questions About Angels, published in 1991, that put him in the literary spotlight

There is no Frigate like a Book
To take us Lands away,
Nor any Coursers like a Page
Of prancing Poetry –
This Traverse may the poorest take
Without oppress of Toll –
How frugal is the Chariot
That bears a Human soul.

“There is no Frigate like a Book” from The Poems of Emily Dickinson, edited by R. W. Franklin – Harvard University Press, 1999

Emily Dickinson (1830-1886) America’s best-known woman poet and one of the nation’s greatest and most original authors, lived the life of a recluse in Amherst Massachusetts. She wrote nearly 1800 poems, ignoring the traditional poetic forms prevailing among most of the other poets of her day. The extent of her work wasn’t known until after her death, when her younger sister Lavinia discovered her huge cache of poems

Notes On The Art Of Poetry

I could never have dreamt that there were such goings-on
in the world between the covers of books,
such sandstorms and ice blasts of words,
such staggering peace, such enormous laughter,
such and so many blinding bright lights,
splashing all over the pages
in a million bits and pieces
all of which were words, words, words,
and each of which were alive forever
in its own delight and glory and oddity and light.

Dylan Thomas (1914-1953) Welsh poet and author; he left school at 16 and worked as a journalist for a short time. By 1934, he was a well-known poet and short story writer, but found earning a living as a writer was difficult, so he augmented his income with reading tours and radio broadcasts. Under Milkwood, A Child’s Christmas in Wales and other works were broadcast by BBC radio. He also went on tours in America during the early 1950s, before his death at age 39 in New York City in 1953, from the combined effects of alcoholism and bronchial disease

Where My Books Go

ALL the words that I utter,
And all the words that I write,
Must spread out their wings untiring,
And never rest in their flight,
Till they come where your sad, sad heart is,
And sing to you in the night,
Beyond where the waters are moving,
Storm-darken’d or starry bright.

William Butler Yeats (1865-1939), one of Ireland’s most revered poets and playwrights. His work has been widely circulated and anthologized.

The pleasant mustiness of old books,
the stiffened bindings of the new
and the smell of ink, paper, glue,
and you have found your way again.
The college stacks, the secluded
carrels, the whisper-squeak
of the librarian’s cart.

Up the back stairs into the room
called Kilby, quiet with the hush
of study, the scratch of pen, the click
of laptop keys, a muffled rattle of ideas.

This is the place where words regain
their meaning, the books –Tolkien,
Chesterton — packed in like bricks–
Sayers, Lewis, MacDonald–
and parked on tabletops — Barfield,
Williams. Occasionally, a spray
of dust-moted sun
and through the windows a glimpse
of the unwritten world outside these words.

You have missed entire seasons
inside such spaces (the ripening of summer,
the blazing of fall), besotted with words,
breaking print into patterns,
tracing images, wrestling language
amidst the undiscipline of marginalia
in rooms like this filled with the whisperings
of words, not words that fall back inside
themselves like ice on a thawing pond,
but words that disperse to fill a space,
like breath that weaves the pliant silence
into the warp and woof of music.

Jill Baumgaertner, born as Jill Peláez, the daughter of an USAF officer who grew up all over the world. When she was a small girl, her Cuban relatives were trying to flee Castro’s regime. She taught at Valparaiso University, then was a Professor of English at Wheaton College from 1980 until her retirement in 2017. She is the author of What Cannot Be Fixed, Finding Cuba, Leaving Eden, Namings, and My Father’s Bones. She is the poetry editor of The Christian Century magazine.

I Opened a Book

I opened a book and in I strode.
Now nobody can find me.
I’ve left my chair, my house, my road,
My town and my world behind me.

I’m wearing the cloak, I’ve slipped on the ring,
I’ve swallowed the magic potion.
I’ve fought with a dragon, dined with a king
And dived in a bottomless ocean.

I opened a book and made some friends.
I shared their tears and laughter
And followed their road with its bumps and bends
To the happily ever after.

I finished my book and out I came.
The cloak can no longer hide me.
My chair and my house are just the same,
But I have a book inside me.

Julia Donaldson (1948 – ) English writer, children’s author, playwright, poet and performer. She was the British Children’s Laureate (2011-2013). Her rhyming stories for children, including The Gruffalo, which won the 1999 Smarties Gold Award, Room on the Broom, winner of the 2002 Sheffield Book Award, and The Snail and the Whale, are very popular.

Nona Blyth Cloud has lived and worked in the Los Angeles area for the past 50 years, spending much of that time commuting on the 405 Freeway. After Hollywood failed to appreciate her genius for acting and directing, she began a second career managing non-profits, from which she has retired. Nona has now resumed writing whatever comes into her head, instead of reports and pleas for funding. She lives in a small house overrun by books with her wonderful husband.
View all posts by wordcloud9 →
This entry was posted in Poetry, The Coffee Shop and tagged Billy Collins, Cornelia Funke, Dylan Thomas, Emily Dickinson, Jill Baumgaertner, Julia Donaldson, TCS: Poems for Read Across America Day, William Butler Yeats. Bookmark the permalink.

4 Responses to TCS: Poems for Read Across America Day