Baha’i – Martyrdom of the Báb *

455 – Military commander Avitus, a Gallic-Roman, is proclaimed Emperor of the Western Roman Empire, but his reign ends in October 456, because the Senate and the People of Rome found him too chummy with Visigoth King Theodoric II

595 – General Kim Yu-sin of the Korean kingdom of Silla, with his Tang dynasty allies, defeats the army of the kingdom of Baekje in the Battle of Hwangsanbeol; Baekje’s General Gyebaek is killed, and Baekje King Uija surrenders

1249 – Japanese Emperor Kameyama born, his reign began when he was eleven years old, and lasted from 1259 to 1274, when he abdicated to his son, Emperor Go-Uda, and began his reign as cloistered emperor, until his son was pressured to abdicate in 1287. In 1291, Kameyama helped establish the Buddhist temple Nanzen-ji in Kyo. He died at age 56 in 1305

1511 – Dorothea of Saxe-Lauenburg born, Queen consort of Denmark and Norway by her marriage to King Christian III. While she has no public power, she was known to be a trusted advisor by her husband, and wielded some degree of power behind the scenes. She was a strict parent, both to her own children, and to several children of noble families that she raised as foster children, but she helped free her lady-in-waiting Birgitte Gøye from an engagement made against her will by her family when she was 14 years old. The queen persuaded her husband to launch an investigation into the matter, which resulted in a new law that banned parents from arranging engagements for their minor children 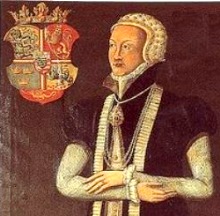 Portraits of Henry VIII and Anne of Cleves by H. Holbein

1764 – Gothic Novel Day * – Ann Radcliffe born, English novelist, pioneer of the Gothic novel; noted for The Romance of the Forest and The Mysteries of Udolpho

1776 – General George Washington orders the Declaration of Independence read to Continental Army troops in Manhattan, as thousands of British troops on Staten Island prepare for the Battle of Long Island

1793 – Upper Canada’s Legislative Assembly passes An Act to Prevent the further Introduction of Slaves and to limit the Term of Contracts for Servitude within this Province, which bans importing slaves, and frees children born to female slaves when they reach age 25

1816 – Argentina declares its independence from the Spanish Empire

1850 – The Bab, Herald of the Bahá’í faith, is executed by firing squad in Tabriz, Persia

1900 – Britain’s separate Australian colonies are unified into one country

1910 – Govan Mvuyelwa Mbeki born, South African politician, activist and writer; South African Communist Party member in the 1930s, and joined African National Congress in 1935. He was the editor (1938-1944) of Inkundla Ya Bantu (originally The Territorial Magazine.) He served on the Transkei Territorial Authorities General Council (1944-1950.) The SA Communist Party was banned in 1950. In 1952, Mbeki was imprisoned for three months, convicted of disobeying apartheid laws by participating in Defiance Campaign. He worked on several newspapers, including the New Age, the (South African) Guardian, Fighting Talk and Liberation. In 1960, he was banned, and became part of Umkhonto we Sizwe, the armed wing of the ANC, improvising bombs, until his arrest in 1963. He was sentenced to Robben Island, where he remained for 24 years, until being released in 1987. He was elected to South Africa’s post-apartheid Senate (1994-1997), where he served as Deputy President, and then served on the National Council of Provinces (1997-1999). He died in 2001, at the age of 91. Noted for his book, The Struggle for Liberation in South Africa: A Short History, published in 1992

1917 – Krystyna Chlond Dańko born, Polish orphan in Otwock who saved the lives of her Jewish friend Lusia Kokszko, and Lusia’s family during the WWII Nazi occupation of Poland, smuggling two of them out of Otwock to Warsaw; she hid the rest of the family, and brought them food and clothing; in 1998, she was awarded the title Righteous among the Nations by Yad Vashem. Most of the rest of the Jews of Otwock perished in the Triblinka death camp, or were summarily shot when the Otwock ghetto was liquidated in September 1942 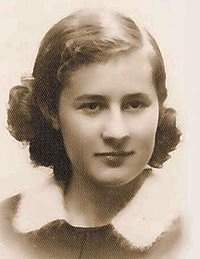 1926 – Mathilde Krim born in Italy, American medical researcher, part of the team that developed a prenatal method to determine fetal gender; one of the earliest researchers to recognize the severity of the threat of AIDS, she was the founding chair of AIDS Medical Foundation which became amfAR, an association for AIDS research; she was honored in 2000 with Presidential Medal of Freedom, and the 2003 Jefferson Award for Greatest Public Service Benefiting the Disadvantaged 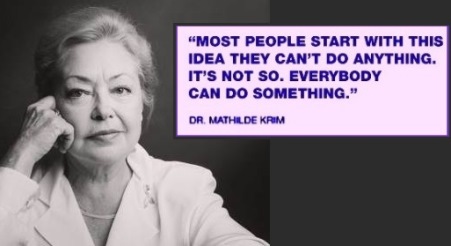 1930 – Janice Lourie born, American computer scientist and graphic artist; pioneer in CAD/Cam for the textile industry, best known for inventing software tools that facilitate textile production from artist to manufacturer; a founding member of the Camerata of the Boston Museum of Fine Arts, and played the tenor shawm and psaltery from the museum collection

1931 – Sylvia A. Bacon born, American Associate Judge of the Superior Court of the District of Columbia (1970-1991), appointed by Richard Nixon; worked for the U.S. Department of Justice (1956-1970) and served under Ramsey Clark, helping to draft legislation for D.C. court reform 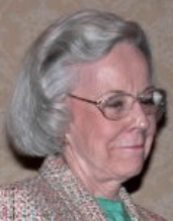 1933 – Nunavut Day * – The Canadian Parliament passes the Nunavut Land Claims Agreement Act and the Nunavut Act, leading to splitting Nunavut from the Northwest Territories  as a separate territory in 1999

1936 – June Jordan born, American poet, writer, educator and activist, columnist for The Progressive, librettist for the musical I Was Looking at the Ceiling and then I Saw the Sky, recipient of numerous awards including the Achievement Award for International Reporting from the National Association of Black Journalists

1940 – The German Evangelist Church protests Adolph Hitler’s euthanasia pogroms, officially known as Action T4, which ultimately murdered 200,000 people, using medications like phenol, starvation or gas. The victims are mentally or physically disabled. Action T4 is the next step following the law the Nazis enacted soon after they took power in Germany, which forced the sterilization of people with such diseases as Huntington’s, schizophrenia, and epilepsy

1953 – Margie Gillis born, Canadian modern dance choreographer and solo dancer whose repertoire includes over 100 pieces; in 1987, she became the first modern dance artist to be awarded the Order of Canada; in 2008, the inaugural recipient of the Stella Adler MAD Spirit Award for her involvement in social causes

1970 – Masami Tsuda born, Japanese shōjo manga artist; noted for Kare Kano: His and Hers Circumstances, and the series  Chotto Edo Made 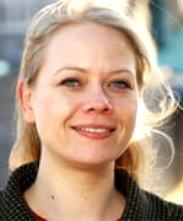 1978 – In  hot, humid weather, 100,000 supporters of the Equal Rights Amendment (E.R.A.) march in Washington DC, with banners in purple and white to honor the National Woman’s Suffrage Party of Alice Paul. Paul turned, immediately after the long-awaited success of the campaign for women’s right to vote, to making women’s legal equality a Constitutional amendment, first introduced in Congress in 1923, but not sent to the states for ratification until 1972. The march supports bill H.J.R. 638, to extend E.R.A.’s deadline to March 22, 1979. Only eight votes by state senators in three states had kept the E.R.A. from being ratified by March 1, 1977

1987 – Rebecca Sugar born, American animator, producer and songwriter; the first woman animator to independently create a series for a network, the Cartoon Network series Steven Universe, which first aired in 2013. She was previously a writer and storyboard artist on the network’s Adventure Time series (2010-2013). She has been nominated five times for Primetime Emmy Awards 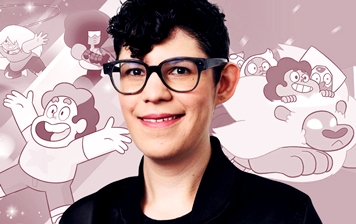 2002 – The African Union, a geo-political organization of 55  countries of the African continent, meets in Addis Ababa, Ethiopia, and South African President Thabo Mbeki becomes its chairman

2011 – South Sudan becomes a new nation, breaking away from Sudan after two civil wars over five decades that cost millions of lives 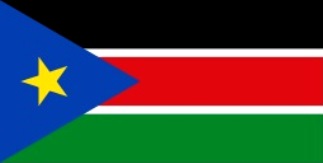 2013 – The three kidnapped women, held captive in a Cleveland house and raped for over ten years, release a video. In their first public statement since their escape, they thank the many supporters for “such an outpouring of love and kindness.” The Courage Fund, established to help them, had already raised over $1 million

2018 – China announces that the poet Liu Xia, who had been under house arrest and 24-hour surveillance since 2010 when her husband, author and activist Liu Xiaobo, won the Nobel Peace Prize, will be allowed to leave the country for Berlin, Germany. She had never been charged with a crime. The announcement came just days before the one-year anniversary of Liu Xiaobo’s death from liver cancer while serving an 11-year sentence for “inciting subversion of state power.” His arrest and incarceration set off world-wide protests and appeals for his release

2019 – A federal appeals court ruled that it is unconstitutional for Donald Trump to block critics from his Twitter feed. Trump routinely tweets to communicate directly with the public, blasting opponents and spelling out new positions. Judge Barrington D. Parker wrote for a three-judge panel of the U.S. Court of Appeals for the 2nd Circuit in New York that since Trump essentially is using Twitter to conduct government business, he can’t exclude people “from an otherwise open online dialogue” simply because they expressed views he doesn’t like. The judge added that “if the First Amendment means anything, it means that the best response to disfavored speech on matters of public concern is more speech, not less.”

2019 –British Members of Parliament voted resoundingly to extend same-sex marriage and access to abortion to Northern Ireland, bringing the region into line with the rest of the UK on the two significant social issues. The two historic votes, arriving within little more than a quarter of an hour of each other, were greeted ecstatically by equalities campaigners. With ministers promising to respect the results, they could have vital repercussions for people in Northern Ireland. Both were the culmination of long campaigns by backbench Labour MPs, who said the government’s argument that the changes could only be made by the devolved Northern Irish government was defunct, given it has been suspended amid political deadlock since the start of 2017. The changes came via amendments to an otherwise technical government bill connected to budgets and elections for the devolved assembly. In the first amendment from Labour MP Conor McGinn, a longstanding campaigner for equal marriage in Northern Ireland, the Commons voted 383 to 73 to extend it to the region. In a vote soon afterwards, MPs approved an amendment by another Labour MP, Stella Creasy, to extend abortion rights to Northern Ireland, the only part of the UK where it remains illegal. The vote was passed by 332 to 99. Creasy’s amendment argued that abortion laws in Northern Ireland, where women seeking a termination can face life imprisonment, were contrary to international human rights norms. “How much longer are the women of Northern Ireland expected to wait?” she told MPs. “How much more are they expected to suffer before we speak up – the best of what this place does – as human rights defenders, not human rights deniers?” After the vote, Creasy tweeted: “Thank you to everyone who today stood up for equality in Northern Ireland – whether for same-sex marriage or abortion, today we have said everyone in the UK deserves to be treated as an equal. There’s a road to go yet but today a big step forward.”

Nona Blyth Cloud has lived and worked in the Los Angeles area for the past 50 years, spending much of that time commuting on the 405 Freeway. After Hollywood failed to appreciate her genius for acting and directing, she began a second career managing non-profits, from which she has retired. Nona has now resumed writing whatever comes into her head, instead of reports and pleas for funding. She lives in a small house overrun by books with her wonderful husband.
View all posts by wordcloud9 →
This entry was posted in History, Holidays, On This Day and tagged Ann Radcliffe, Dr. Daniel Williams, Govan Mvuyelwa Mbeki, June Jordan, Kaikhusrau Jahan, Mercedes Sosa, Thabo Mbeki. Bookmark the permalink.
%d bloggers like this: