Hot Enough for Ya Day

811 – Nikephoros I, Emperor of the Byzantine Empire, invades Bulgaria, and sacks the capital city Pliska, killing hundreds, even small children; during his army’s retreat, they are ambushed by Krum, the Khan of Bulgaria, who destroys the army, captures Nikephoros, and orders his decapitation. Legend has it that Krum had a drinking cup made from the emperor’s skull 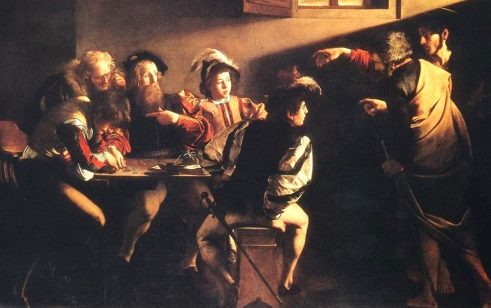 The Calling of St. Matthew – Caravaggio

1721 –  Anna Dorothea Therbusch born in Germany,  Polish Rococo painter; elected to the Stuttgart Academy of the Arts, the Bologna Academy, the Académie Royale in Paris, and the Academy of Fine Arts in Vienna 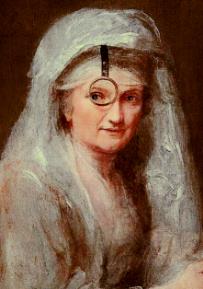 1775 – Étienne-Louis Malus born, French officer, engineer, physicist and mathematician whose field was the study of light; he published his discovery of the polarization of light by reflection in 1809, and his theory of double refraction of light in crystals in 1810, when he also became a member of the Académie des Sciences, and was awarded the Rumford Medal by the Royal Society of London

1828 – Sir Jonathan Hutchinson born, Quaker physician-surgeon; focused on the human nervous system, and sexual diseases among the poor; traveled in Africa and Asia, bringing back animal specimens, minerals and fossils; opened an “education museum” with a reading room and library, where he gave lectures on scientific topics 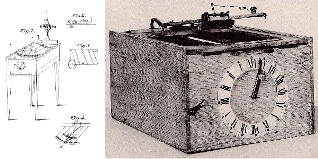 1844 – Harriet Williams Russell Strong born, American activist, and inventor who pioneered innovations in water storage and flood control which enabled the construction of the Hoover Dam and the All-American Canal; water conservationist, music composer, and a leader in the West Coast woman suffrage movement; first woman member of the Los Angeles Chamber of Commerce

1864 – Apolinario Mabini born, Filipino revolutionary leader, educator, lawyer, and statesman; in 1899, he was the first Prime Minister and Minister of Foreign Affairs of the First Philippine Republic (1899-1901). He was struck by Polio in 1895, and lost the use of his legs by 1896. He was exiled by the Americans in 1901 after he refused to swear fealty to the U.S., but returned to the Philippines on 1903 after agreeing to take the Oath of Allegiance. He died of cholera shortly after his return, at the age of 38

1889 – Anna Akhmatova born, Ukrainian-Russian poet and author; one of the most significant Russian poets of the 20th century

1892 – Icie Hoobler born, biochemist and physiologist; first woman to head a local section of the American Chemical Society and to serve as its national president; Director of the Research Laboratory of the Children’s Fund of Michigan; her research centered on human nutrition, specifically for mothers and children, and related to child growth 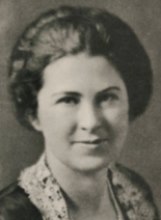 1900 – Inger Margrethe Boberg born, Danish folklore researcher and author; first woman in Denmark to earn a Doctor of Philosophy, in folkloristics; worked as an archivist at Dansk Folkemindesamling (Danish Folklore Archive) from 1932-1957, but it didn’t become a full-time position until 1952, so she also took on temporary work as a school teacher. Recipient in 1945 of the Tagea Brandt Rejselegat, awarded to Danis women who make significant contributions in the sciences or arts, which enabled her to travel and further her studies; co-editor with Stith Thompson of the Motif-Index of Folk-Literature 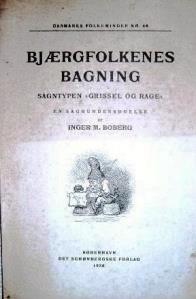 1907 – Elspeth Joscelin Grant Huxley born, British writer, journalist, broadcaster, magistrate and environmentalist; author of 30 books, best known are those based on her childhood on a Kenyan coffee farm; The Flame Trees of Thika

1908 – Elio Vittorini born, Italian novelist, translator and literary critic; jailed in 1941 when his anti-fascist novel, Conversations in Sicily, was published

1916 – Laurel Martyn born, Australian ballerina and choreographer; on 1935, she was the first Australian woman to be accepted into the Vic-Wells (later Sadler’s Wells) Ballet, and became a soloist in 1938. After returning to Australia, she performed with the Borovansky  Ballet, taught dance, and created her own dance works inspired by Australian themes. She was a co-founder of the Young Dancers’ Theatre, and Classical Dance Teachers Australia

1928 – Michael Shaara born, American author and academic, best known for his American Civil War novels, The Killer Angels, which won the 1975 Pulitzer Prize for Fiction, and The Last Full Measure

1928 – Vera Rubin born, American astronomer; studied with Maria Mitchell at Vassar; she was the only graduate in astronomy from Vassar in 1948, then was barred from enrolling in the graduate program at Princeton, which didn’t allow women until 1975. Rubin got her Master’s at Cornell, and her PhD at Georgetown, in spite of having to battle sexism at almost every step. When the men at the Palomar Observatory told her, ‘It’s a real problem because we don’t have a ladies room,’ she cut a piece of paper into a skirt and stuck it on the male figure on the door to one of the men’s restrooms. She said, ‘Look, now you have a ladies room.’ Rubin did the pioneering work on galaxy rotation rates, uncovering the discrepancy between the predicted angular motion of galaxies and the observed motion, by studying galactic rotation curves, which became known as the galaxy rotation problem, work that was compelling evidence of the existence of dark matter. Rubin’s results were met with great skepticism, but over subsequent decades, they were confirmed. She was a strong advocate and mentor of women in science; honored with numerous awards, including the Bruce Medal, the Gold Medal of the Royal Astronomical Society, and the National Medal of Science, but was never honored with a Nobel Prize

1929 – The Fascist government of Italy bans the use of foreign words, especially French and English words and phrases – if there wasn’t an Italian word, they would Italianize the foreign word – Barolo (Italian) for Bordeaux (French)

1931 – Te Arikinui (Paramount Chief) Dame Te Atairangikaahu born, Māori queen for 40 years, the longest reign of any Māori monarch; Te Atairangikaahu means ‘hawk of the morning sky’; in 1979, first Māori appointed a Dame Commander of the Order of the British Empire; she was a strong supporter of Māori cultural events, and a spokesperson on indigenous issues

1936 – The Social and Communist parties of Catalonia, Spain, merge into the United Socialist Party of Catalonia

1940 – Danielle Collobert born, French author, poet and journalist; she worked at the Galerie Hautefeuille, a major art photography gallery, in Paris in the early 1960s while writing what would become her novel, Meurtre (Murder), and her first published book, Chants des Guerres (War Songs); she became involved in 1962 with the Front de libération nationale (FLN), Algeria’s nationalist movement, and wrote for the Algerian magazine Révolution Africaine until it stopped being published in 1964; joined the Writers’ Union in 1968, and traveled in Czechoslovakia, writing about the Prague Spring and its aftermath; committed suicide on her 38th birthday; her last work, Survie  (Survival), was published just three months before her death

1942 – Sallyanne Atkinson born, Australian Liberal Party politician and journalist; Lord Mayor of Brisbane (1985-1991), the first woman to be elected to the position; worked for the Brisbane Telegraph (1960-1962) and the Courier Mail (1963-1964); Alderman on the Brisbane City Council (1979-1985); since 2017, she has been the Chair of the Museum of Brisbane, and Council President of the Women’s College at the University of Queensland

1952 – Egyptian King Farouk is overthrown by the Free Officers Movement

1957 – Jo Brand born, English comedian, writer and presenter, former psychiatric nurse, who began her comedy career doing stand-up at alternative comedy clubs in the mid-1980s billed as ‘Sea Monster.’ In 1993, she became a resident panelist on the BBC show, The Brain Drain. In 2010, she was one of the performers in Channel 4’s Comedy Gala, a benefit for the Great Ormond Street Children’s Hospital. She has written several books, including the novel The More You Ignore Me, which she adapted as a feature-film script. She was the presenter of The Great British Bake Off: An Extra Slice (2014-2017)

1961 – The Sandinista National Liberation Front is founded in Nicaragua

1967 – Rioting erupts in Detroit Michigan; after police arrest 85 black people at an unlicensed bar, a crowd gathers and begins throwing rocks and bottles

1976 – Judit Polgár born, Hungarian Grandmaster in chess, considered the strongest woman player of all time; achieved the Grandmaster title at 15 years, 4 months, breaking the Youngest Grandmaster record previously held by World Champion Bobby Fischer; she was also the youngest player to break into the FIDE Top 100 players rating list, ranking #55 in the world at the age of 12; in 2005, she became the first, and to date, only woman to qualify for a World Championship Tournament, to surpass a 2700 Elo, reaching a career peak of 2735, and to reach a world ranking of #8; she held the title of #1 ranked woman in the world from 1989 to 2014, when she was briefly overtaken by Chinese player Hou Yifan, but regained her #1 ranking in 2015, shortly after announcing her retirement from competitive chess; the only woman to win a game against a reigning World Champion, also defeated eleven current or former World Champions in at least one game

1995 – Comet Hale-Bopp is discovered; it becomes visible to the naked eye on Earth nearly a year later

2001 – Megawati Sukarnoputri becomes the first woman president of Indonesia after the President Abdurrahman Wahid is removed from office. She is given day-to-day control of the government beginning in August 2000 and serves as President from July 2001 to October 2004, but loses in the 2004 election

2003 – The Massachusetts’ attorney general issues a report that clergy others in the Boston Archdiocese likely sexually abused more than 1,000 people over six decades

2018 – The Trump administration said in a court filing that 463 parents of migrant children are no longer in the U.S., even though their children are. The cases suggest that more undocumented migrant parents might have been deported without their children than the government previously acknowledged. The figure was included in a progress report submitted to U.S. District Judge Dana Sabraw, who gave the Trump administration a deadline that expires in six days for reuniting more than 2,500 children with their parents after they were separated at the U.S.-Mexico border under President Trump’s “zero tolerance” crackdown on illegal immigration. So far, 879 parents had been reunited with their children, the filing said.

2019 – Immigration and Customs Enforcement released a Dallas-born U.S. citizen, Francisco Galicia, from custody over three weeks after he was detained by U.S. Border Patrol agents while crossing into Texas from Mexico on June 27. Galicia was “absolutely” racially profiled, his lawyer Claudia Galan said. He had his Texas state ID with him but no passport, and he was unable to place any phone calls until he was transferred into ICE custody, after three weeks in the custody of Border Patrol, which isn’t supposed to hold people more than 72 hours. Galicia was then able to call his mother. The Dallas Morning News published an article on his wrongful detention. Neither ICE nor U.S. Customs and Border Protection immediately commented. 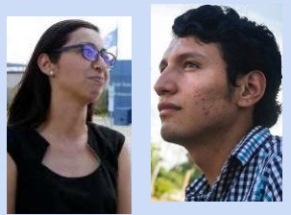 Nona Blyth Cloud has lived and worked in the Los Angeles area for the past 50 years, spending much of that time commuting on the 405 Freeway. After Hollywood failed to appreciate her genius for acting and directing, she began a second career managing non-profits, from which she has retired. Nona has now resumed writing whatever comes into her head, instead of reports and pleas for funding. She lives in a small house overrun by books with her wonderful husband.
View all posts by wordcloud9 →
This entry was posted in History, Holidays, On This Day and tagged Anna Akhmatova, Apolinario Mabini, Bob Dylan, Caravaggio, Judit Polgar, Megawati Sukarnoputri, Te Atairangikaahu. Bookmark the permalink.
Loading Comments...
%d bloggers like this: