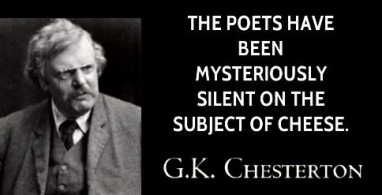 Chesterton attempted to break the poetic silence on the subject of cheese with a sonnet. I don’t find it to be among his best work, but Chesterton is better remembered for his essays and mysteries rather than his poetry.

To read Chesterton’s “Sonnet to a Stilton Cheese” click: 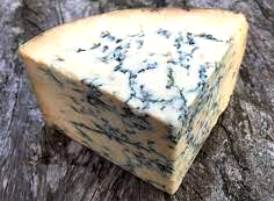 Sonnet to a Stilton Cheese

Stilton, thou shouldst be living at this hour
And so thou art. Nor losest grace thereby;
England has need of thee, and so have I–
She is a Fen. Far as the eye can scour,
League after grassy league from Lincoln tower
To Stilton in the fields, she is a Fen.
Yet this high cheese, by choice of fenland men,
Like a tall green volcano rose in power.
Plain living and long drinking are no more,
And pure religion reading “Household Words”,
And sturdy manhood sitting still all day
Shrink, like this cheese that crumbles to its core;
While my digestion, like the House of Lords,
The heaviest burdens on herself doth lay.

“Sonnet to a Stilton Cheese” from The Collected Poems of G.K. Chesterton – Forgotten Books Ltd – 2018 edition

Nona Blyth Cloud has lived and worked in the Los Angeles area for over 50 years, spending much of that time commuting on the 405 Freeway. After Hollywood failed to appreciate her genius for acting and directing, she began a second career managing non-profits, from which she has retired. Nona has now resumed writing whatever comes into her head, instead of reports and pleas for funding. She lives in a small house overrun by books with her wonderful husband.
View all posts by wordcloud9 →
This entry was posted in Humor, Poetry and tagged Cheese, G.K. Chesterton, G.K. Chesterton’s Birthday, Sonnet to a Stilton Cheese. Bookmark the permalink.
Loading Comments...
%d bloggers like this: