Before Memorial Day – for the Widows Left Behind By War

Aline Murray Kilmer (1888-1941) American poet, children’s book author, essayist, and from 1908 until his death in 1918, the wife of Joyce Kilmer, a poet who is mainly remembered for his poem “Trees,” and for dying young in the ‘War to End All Wars.’ She was the mother of five children, but their oldest daughter was stricken with infantile paralysis and died at age four in 1917, shortly before her husband was deployed to France. He was killed in 1918 at age 31 by a sniper’s bullet at the Second Battle of the Marne. Aline Murray Kilmer turned to writing children’s books and publishing her poetry to support her four remaining children. Her second son, Michael, died at age 11 in 1927. 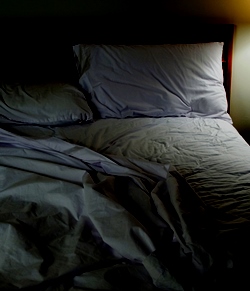 WHEN a storm comes up at night and the wind is crying,
When the trees are moaning like masts on laboring ships,
I wake in fear and put out my hand to find you
With your name on my lips.

No pain that the heart can hold is like to this one–
To call, forgetting, into aching space,
To reach out confident hands and find beside you
Only an empty place.

This should atone for the hours when I forget you.
Take then my offering, clean and sharp and sweet,
An agony brighter than years of dull remembrance.
I lay it at your feet.

“Atonement” is in the public domain.

Nona Blyth Cloud has lived and worked in the Los Angeles area for the past 50 years, spending much of that time commuting on the 405 Freeway. After Hollywood failed to appreciate her genius for acting and directing, she began a second career managing non-profits, from which she has retired. Nona has now resumed writing whatever comes into her head, instead of reports and pleas for funding. She lives in a small house overrun by books with her wonderful husband.
View all posts by wordcloud9 →
This entry was posted in Poetry and tagged Aline Murray Kilmer, Atonement, Before Memorial Day - for the Widows Left Behind By War, Memorial Day. Bookmark the permalink.
Loading Comments...
%d bloggers like this: