A Poem for National Watch Day

June 19th is National Watch Day. It was launched in 2017 as part of a celebration of the history and art of watchmaking at Nordstrom department stores.

German inventor Peter Heinlein invented the mainspring, and by 1524 he was producing small portable watches worn on a chain around the neck. In 1675, pocket watches that were small enough to fit in a pocket arrived, popularized by Charles II of England, but they weren’t very accurate. In the 1750s, a lever escapement was added, making pocket watches that only lost a minute or two a day, but the hand-crafted watches were too expensive for most people. Pocket watches made from standardized parts arrived in 1857, making durable and accurate watches affordable for almost everyone. In the last years of the 19th century, the first attempts to standardize time were made. The first ‘modern’ wristwatch was made for the Queen of Naples in 1812, and wristwatches were primarily worn by women, until they began to be issued to military men in the First World War so they could keep their hands free while checking the time. Electric watches were introduced in the 1950s, and the quartz watch in 1969, which made watches more shock absorbent, more accurate, and eliminated the need to wind the watch.

Danusha Laméris (1971 – ) is a poet and teacher who lives in California. Her first poetry collection, The Moons of August, won the Autumn House Press poetry prize in 2014. Her second book, Bonfire Opera, was published in 2020, and Laméris also won the Lucille Clifton Legacy Award that year. 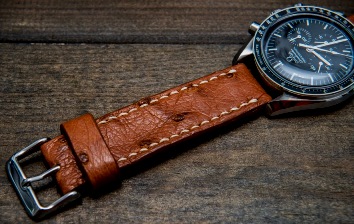 At night, my husband takes it off
puts it on the dresser beside his wallet and keys
laying down, for a moment, the accoutrements of manhood.
Sometimes, when he’s not looking, I pick it up
savor the weight, the dark face, ticked with silver
the brown, ostrich leather band with its little goosebumps
raised as the flesh is raised in pleasure.
He had wanted a watch and was pleased when I gave it to him.
And since we’ve been together ten years
it seemed like the occasion for the gift of a watch
a recognition of the intricate achievements
of marriage, its many negotiations and nameless triumphs.
But tonight, when I saw it lying there among
his crumpled receipts and scattered pennies
I thought of my brother’s wife coming home
from the coroner carrying his rings, his watch
in a clear, ziplock bag, and how we sat at the table
and emptied them into our palms
their slight pressure all that remained of him.
How odd the way a watch keeps going
even after the heart has stopped. My grandfather
was a watchmaker and spent his life in Holland
leaning over a clean, well-lit table, a surgeon of time
attending to the inner workings: spring,
escapement, balance wheel. I can’t take it back,
the way the man I love is already disappearing
into this mechanism of metal and hide,
this accountant of hours
that holds, with such precise indifference,
all the minutes of his life.

Nona Blyth Cloud has lived and worked in the Los Angeles area for the past 50 years, spending much of that time commuting on the 405 Freeway. After Hollywood failed to appreciate her genius for acting and directing, she began a second career managing non-profits, from which she has retired. Nona has now resumed writing whatever comes into her head, instead of reports and pleas for funding. She lives in a small house overrun by books with her wonderful husband.
View all posts by wordcloud9 →
This entry was posted in History, Poetry and tagged Danusha Laméris, National Watch Day, The Watch, Time. Bookmark the permalink.
Loading Comments...
%d bloggers like this: