TCS: How I Went Looking for Belly Laughs but Fell Into a Fable

There are two kinds of light –
the glow that illuminates,
and the glare that obscures.

“The happy man is he
who knows his limitations,
but bows to no false gods.”

I was looking for poetry for Belly Laugh Day, which is one of the January 24 ‘days,’ and I was having trouble finding poems that made me laugh with abandon. Belly Laugh is a much harder category than Humorous.

James Thurber is the author who has given me the most belly laughs because he builds up to them, small detail by small detail, so you start with a smile, then go through snorts, chuckles, chortles, and guffaws, until belly laughing just overwhelms you. The Thurber story that always gets me is “The Night the Bed Fell,” but that is a fairly lengthy tale, so I searched for a shorter example of the Thurber Belly Laugh.

But like Thurber’s digressions in telling his stories, I started out looking for Belly Laughs, and got side-tracked.

Re-reading “The Owl Who Was God” decades after the first time, I see it now as very much a fable for our time, over 80 years after it was first published.

The Owl Who Was God

Once upon a starless midnight there was an owl who sat on the branch of an oak tree.  Two ground moles tried to slip quietly by, unnoticed.  “You!” said the owl.  “Who?” they quavered, in fear and astonishment, for they could not believe it was possible for anyone to see them in that thick darkness.  “You two!” said the owl.  The moles hurried away and told the other creatures of the field and forest that the owl was the greatest and wisest of all animals because he could see in the dark and because he could answer any question.  “I’ll see about that, “said a secretary bird, and he called on the owl one night when it was again very dark.  “How many claws am I holding up?” said the secretary bird.  “Two,” said the owl, and that was right.  “Can you give me another expression for ‘that is to say’ or ‘namely’?” asked the secretary bird.  “To wit,” said the owl.  “Why does the lover call on his love?”  “To woo,” said the owl.

The secretary bird hastened back to the other creatures and reported that the owl indeed was the greatest and wisest animal in the world because he could see in the dark and because he could answer any question.  “Can he see in the daytime, too?” asked a red fox?  “Yes,” answered a dormouse and a French poodle.  “Can he see in the daytime, too?”  All the other creatures laughed loudly at this silly question, and they set upon the red fox and his friends and drove them out of the region.  They sent a messenger to the owl and asked him to be their leader.

When the owl appeared among the animals it was high noon and the sun was shining brightly.  He walked very slowly, which gave him an appearance of great dignity, and he peered about him with large, staring eyes, which gave him an air of tremendous importance.  “He’s God!” screamed a Plymouth rock hen.  And the others took up the cry “He’s God!”  So they followed him wherever he went and when he bumped into things they began to bump into things, too.  Finally he came to a concrete highway and he started up the middle of it and all the other creatures followed him.  Presently a hawk, who was acting as outrider, observed a truck coming toward them at fifty miles an hour, and he reported to the secretary bird and the secretary bird reported to the owl.  “There’s danger ahead,” said the secretary bird.  “To wit?” said the owl.  The secretary bird told him.  “Aren’t you afraid?” he asked.  “Who?” said the owl calmly, for he could not see the truck.  “He’s God!” cried all the creatures again, and they were still crying “He’s God” when the truck hit them and ran them down.  Some of the animals were merely injured, but most of them, including the owl, were killed.

Moral: You can fool too many of the people too much of the time.

Moral for the 21st Century: The more hoot-winking changes, the more it stays the same. 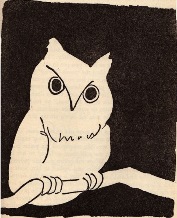 Nona Blyth Cloud has lived and worked in the Los Angeles area for over 50 years, spending much of that time commuting on the 405 Freeway. After Hollywood failed to appreciate her genius for acting and directing, she began a second career managing non-profits, from which she has retired. Nona has now resumed writing whatever comes into her head, instead of reports and pleas for funding. She lives in a small house overrun by books with her wonderful husband.
View all posts by wordcloud9 →
This entry was posted in The Coffee Shop and tagged A fable for our time, Blind Faith, How I Went Looking for Belly Laughs but Fell Into a Fable, James Thurber, TCS, The Owl Who Was God. Bookmark the permalink.
Loading Comments...
%d bloggers like this: