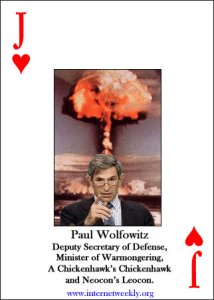 Jeb Bush has performed a valuable service with his recent missteps and flubs, he’s reminded the world of the baggage he willingly carries. I’m not tarring him with the same brush as George W. Bush just because they are brothers. Jeb has voluntarily staffed his foreign policy team with 17 people from his brother’s administration. (This is out of a foreign policy team of 21, mind you.)

Sure, the dynasty thing is bad enough and it’s the same Bush family as before—  but whether Jeb is a Bush or not, he deserves to be pilloried for putting people like Paul Wolfowitz in places where they might have an impact on, you know, foreign policy.  (It boggles my mind Wolfowitz is actually showing his face in public, never mind appearing on cable news and advising another Bush.)

A couple of weeks ago, David Corn wrote an article for Mother Jones titled The Jeb Bush Adviser Who Should Scare You. It was about Wolfowitz—“a top policy architect of the Iraq War.”

Wolfowitz, who was deputy defense secretary under George W. Bush, was a prominent neocon cheerleader for the invasion of Iraq. He was also the top conspiracy theorist in the Bush-Cheney crowd. As Michael Isikoff and I reported in our our 2006 book, Hubris: The Inside Story of Spin, Scandal, and the Selling of the Iraq War, Wolfowitz, prior to the Iraq War, was a champion of a bizarre theory promoted by an eccentric academic named Laurie Mylroie: Iraqi dictator Saddam Hussein, not Islamic extremists such as Al Qaeda, was responsible for most of the world’s anti-United States terrorism.

Corn said that “FBI investigators, federal prosecutors, and the CIA considered her theory and tossed it aside. She had no compelling evidence.” He added that one CIA analyst had noted, “Not only was it not true, we proved the opposite”—that Saddam was not connected to the 1993 bombing. Corn said, however, that Mylroie pressed on—and that “neocons, who had long been diehard supporters of Israel who yearned to drum up support for US military action against Iraq, flocked to her ideas.”According to Corn, Paul Wolfowitz was one of Mylorie’s fiercest advocates. He said that Wolfie, who became the the No. 2 official in the Defense Department after George W. Bush took office, “pushed Mylroie’s theory.”

Wolfowitz’s record in office is littered with profound errors. After General Eric Shinseki, the Army chief of staff, testified before Congress weeks prior to the invasion of Iraq that it would take “several hundred thousand soldiers” to occupy Iraq, Wolfowitz said this estimate was “wildly off the mark.” He discounted the possibility of sectarian violence in Iraq following the invasion, insisted that Iraq’s oil revenues would finance post-war reconstruction, and declared that he was “reasonably certain that they will greet us as liberators.” None of these claims were based on serious Pentagon, State Department, or CIA assessments. And none turned out to be true.

Wolfowitz and all his senior-level colleagues in the Bush-Cheney administration got Iraq wrong. They each were guilty of wishful thinking and arrogantly believed they knew better than area experts in various government agencies. But within this crew, as a ferocious advocate of a wacky and paranoid conspiracy theory, Wolfowitz went further in denying reality. And for that, his judgment ought to be questioned. After all, his passionate embrace of Mylroie’s unproven and screwy thesis caused him to miscalculate one of the most serious threats to the United States. He could have been run out of the public sphere for this. Yet Wolfowitz was awarded the Medal of Freedom by George W. Bush and named president of the World Bank (where he went on to have a scandalous tenure). And now Wolfowitz is advising yet another Bush who may end up in the White House. One can only imagine what dark global conspiracies he’s pitching these days.

Besides Wolfie, there are loads of other people on Jeb’s list of advisers— people like Porter Goss, who gets a bone-chilling shout out in this week’s Frontline piece.  (Right after the 43 minute mark.) While the run up to the Iraq war may seem like a long time ago and a president or two away, Jeb is actively bringing these guys back.

These inept hawks are the ones who took this country to war on a lie and actively contributed to the deaths of thousands of United States servicemen and women and hundreds of thousands of Iraqi citizens.  And remember, this was not just about “faulty intelligence,” the George W. Bush administration (many of who are now in Jeb Bush’s circle of advisers), knowingly used false intelligence to make the case for an unnecessary war.  It’s important to remember the recent past so we don’t put the same criminals and idiots in power again.  Fortunately, things aren’t looking too good for Jeb right now, but the campaign has barely begun. 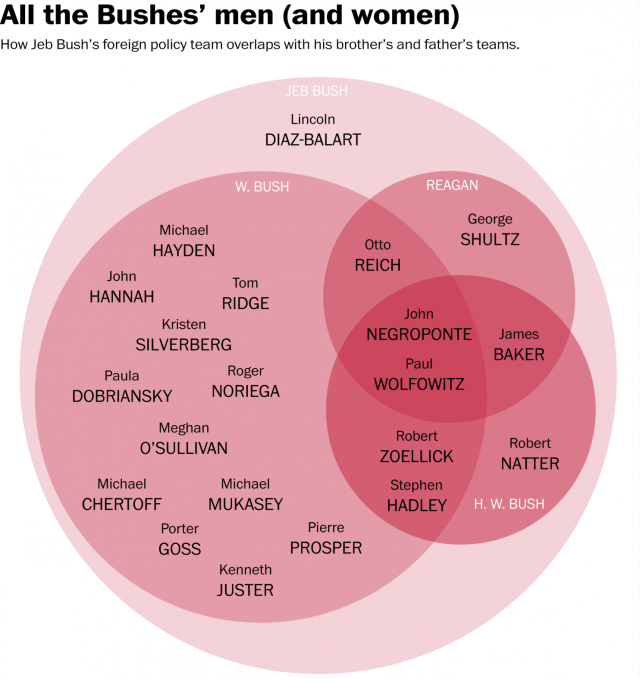 The Jeb Bush Adviser Who Should Scare You: Paul Wolfowitz not only championed the Iraq War—he obsessively promoted a bizarre conspiracy theory. (Mother Jones)