Justice Antonin Scalia: The Bard of the Bench? (With a Mark Fiore Political Cartoon Video)

Award-winning political cartoonist Mark Fiore said that it only seemed fitting “to use Antonin Scalia’s own words for a poetry slam, since the justice’s snarky dissents are filled with so many poetic gems.”  Fiore noted that the “Affordable Care Act victory was followed quickly by the same-sex marriage win, and Scalia’s dissents have become increasingly irate and colorful.”

Turns out, trying to bring health insurance to millions of people in the United States is not illegal and neither is letting two people who love each other get married.  Go figure.  Once the fulminating conservatives cool off, hopefully health insurance and marriage will become boring again and we’ll look back on this and laugh.

Though Scalia had some wins this Supreme Court term, it’s fascinating to see how unhinged he becomes in his dissenting opinions.  Amazingly, he even dissented while concurring!  As a cartoonist, I love this guy.  As a citizen, not so much.  Enjoy your Obamacare, go get married no matter who you love and be sure to enjoy the sputtering frustration of Scalia…

Lauren Leatherby of NPR said that Scalia is “a master of melodramatic flair.”

Jordan Weissman (Slate) was  also impressed with Justice Scalia’s use of words:

Justice Antonin Scalia may have been on the losing side in this morning’s big health care decision, but as usual, he definitely won the day’s contest to see who could pack the most hilarious and anachronistic zingers into a dissent. On Twitter, Matthew Lauer has plucked some of the best one-liners. What was the majority opinion? “Pure applesauce” and “jiggery-pokery.” Also, “words no longer have meaning.” We expect nothing less from the man who brought us “argle-bargle.”

He described one aspect of Chief Justice John Roberts’ majority opinion as “sheer applesauce,” took a poke at what he described as “interpretive jiggery-pokery” and accused his colleagues of “somersaults of statutory interpretation.”

A little light verse that I wrote today about Antonin Scalia: 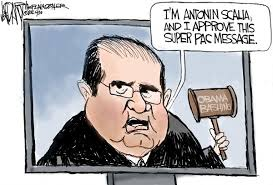 ‘Jiggery-Pokery’: The Justices Have A Punny Way With Words (NPR)

4 Responses to Justice Antonin Scalia: The Bard of the Bench? (With a Mark Fiore Political Cartoon Video)