In the abstract, there’s too much meta in global politics. Yet as today’s interview of Robin Wright on NPR indicates having that more theoretical view is very important to gaining perspective on the various machinations of domestic politics for 2016. What is so illuminating about Wright’s view is that understanding the fine-grained issues of demographic change in West Asia is important to have a perspective on how the Iraq invasion of 2003 was the greatest foreign policy disaster in US history from which we may never recover. Fussing about Benghazi ignores the real problem of not engaging the necessity to have spent greater international capital on regional stability during the immediate post-Quaddaffi period in Libya and during the Arab Spring(sic).

The background for that history is clearly about the developmental issues of internal secession in Iran and Saudi Arabia and the emergence of divergent generations that will create both the openings and the direction of diplomacy and military action in the coming decades. Understanding those issues of monarchism, tribalism, and pluralism allows one to see how the scale of action and the structure of discourse is important to have a perspective on how easy it would be to be nativist and non-interventionist, but to do so would deny the possibility of world comity.

Similarly North Korean nuclear testing is a similar suicidal cry for help much like those who would manipulate individuals to commit terrorist acts. And yet suicide bombing at increasing scales has so much spectacle and message that even desensitizing their carnage has become a common feature of international media. In the face of such violence the larger pespective must be maintained if democracy can become more ubiquitous. Ultimately states cannot be suicidal, Daesh notwithstanding, but it is why the name of ISIL is such an ironic sign of nihilism.

Without giving support to martyrdom insanity, this raises more generally the premise that LEOs think that a percentage of shooting situations are suicidal(sic) which will exonerate their actions. The premise of self-annihilation is unfortunately not a very durable concept for the average LEO, much less politicians. That St Paul Minnesota has a cop devoted to handling situations that might involve autistic individuals seems like such an isolated activity.

So in terms of message construction today’s French attack was a reference to the attack on Charlie Hebdo anniversary which in itself was an anti-blasphemy attack related to the Danish cartoon publication of now so many years ago. That this latest attack used a fake bomb vest and a knife by what may have been someone with issues of street culture removes the reasons for acting so far away from its origins. The tragedy of valorizing “suicide by police” as an apocalyptic national policy needs even more intense solution in terms of a spreading international conflict as Daesh loses actual territory for sovereignty.

That we now have US politicians who can only employ the rhetoric of ignorant LEOs in terms of race, class, and gender should give everyone pause about their ability to handle the larger cultural issues of US national policy.

Police in Paris shot dead a man wielding a meat cleaver and a fake suicide vest outside a police station while shouting Alahu Akbar, a year after Islamists killed 12 at Charlie Hebdo’s offices.

The assailant, described as “threatening” by police sources, was gunned down as he tried to force his way into the police station of Paris’ 18th arrondissement. He was found to be wearing a pouch taped to his coat with wires dangling from it. However, it later proved to be a “fake” suicide belt.

He was named by French media as Sallah Ali, a 20-year old homeless Moroccan born in Casablanca in 1995. 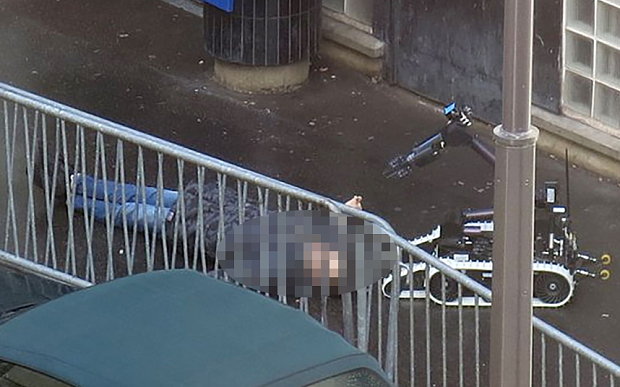