“Avenge me…” the Red Dawn protagonists’ father cries out, and with his passing, will LaVoy Finicum’s legacy be a 2015 novel that could become The Turner Diaries for a new generation of RWNJ. 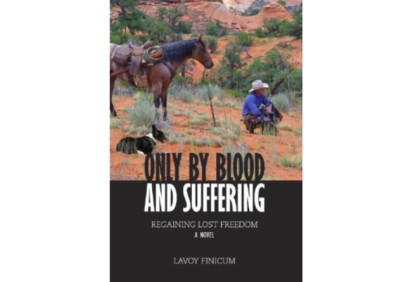 Finicum’s 241-page apocalyptic cowboy thriller titled “Only By Blood and Suffering” is a how-to on surviving after a electromagnetic pulse or nuclear attack when your Escalade stops driving, the government has bought back all of your guns, President Bill Clinton signed away your country’s missile technology to the Chinese, the Supreme Court is loaded with lefty judicial activists and you don’t have an adequate amount of gold and “junk silver” to get by when the stock market implodes, interest rates balloon overnight and the value of the dollar collapses.

The major figures in the Bundy bantustan occupation were arrested and one was killed in a shootout during a “traffic stop” although it now appears to have been a tactical warrant-serving arrest on the road to Grant County, Oregon.

That this event occured away from the siege area at the Malheur Wildlife Refuge seems to suggest that the take-down was a planned FBI action executed while minimal protection was available to the Bundystani during the trip to a meeting with a sympathetic Sheriff from a jurisdiction outside of Harney County.

No LEO casualties were reported and that it was primarily a Federal action provides cover for the Oregon state and county authorities.

This may have taken place because of the resistance of the insurgency to negotiate an actual end to the armed occupation and the nature of their demands as well as a willingness to extend the siege for many months, leaving the FBI to blink first.

One militia member—LaVoy Finicum, a.k.a #TarpMan—was shot and killed, though authorities have not released details about who fired the fatal shot. According to NBC News, Finicum had previously said he’d rather die than be arrested: “I have no intention of spending any of my days in a concrete box. There are things more important than your life and freedom is one of them. I’m prepared to defend freedom.” (Finicum, father of 11, was also the author of a novel, Only By Blood and Suffering: Regaining Lost Freedom.)

More interesting will be whether the fate of the insurgency will resemble that of the Montana Freemen in 1996 with multiple year jail sentences, although the death of an insurgent after none were killed in the prior Bundy standoff in Nevada could encourage or deter further sovereign insurgency activity.