So Trumpians, RWNJs, and lesser neoconservatives might be described as the following: “They talk a lot about justice. They talk a lot about freedom. They want to change the society into a positive direction. They believe that they’re doing something good for humanity.” Sounds so much like the beliefs of those fighting for social justice as well as members of law enforcement who”serve and protect”. Darn those warriors.

While traveling in Germany for our series on Muslim identity in Europe, we came across a curious program, one based on the idea that neo-Nazis and Islamist extremists have something in common.

Koehler is a radicalization expert, more specifically a de-radicalization programmer. Noting of course the issue of repatriated terrorist suspects who may or may not have “returned to the field”.

And the rise of radicalization “experts” range from those resurrecting 1950s anti-Communist memes, to those warning of some new tweeted iteration of the Black Panthers because Angela Davis, to those who know for sure that anyone who speaks in their first language on the phone on a plane or in a motel lobby in Avon, Ohio must be pledging allegiance to DAESH.

The consequences of expert discourse, the meat and potatoes of 24/7 basic cable news guests and their quasi-journalistic drivel is to give ex-cops or worse, ex-spooks, further consulting fees… This raises the question of whether the so-called cultural marxists are perhaps the best media experts to consult on matters of radicalization.

First, it is difficult to maintain a conceptual thread through public discourse, protected social practices, and democratic legitimation while treating each of them as independent and important parts of First Amendment analysis.

Second, (Robert) Post’s theory raises intractable questions about how expert knowledge is disseminated into public discourse and how it should be treated once it arrives there.  scholarship.law.duke.edu/…

More importantly radicalization discourse in the media aside from the institutional bias of the usual suspect elites continues the kinds of mystification that reifies itself in so many violent incidents whether state terrorism or non-state terrorism.

The scientism of such discourse now comes from various methodologies whether legalism, behavioralism, and after-action profiling whose recent tragedies came in video recorded reactions to the speech act utterance: “GUN”, as though one could compare the necessary protection actions of the Secret Service with unnecessary quick-draw situations or worse — shooting at unarmed perps in flight.

It is that framing battle of rationalization using “experts on radicalization” rather than bad de-escalation training for frightened LEOs – which cult of death gets more attention, and why don’t the ‘baggers object to the taxpayers’ burden of civilian wrongful death and soon police liability protection suits.

Expert discourse in media might soon become dangerous triggers as they incorporate clips from YouTube and Instagram as an instrument of audience terror(sic) but also as examples of threat neutralizing.

There was, for example, a manifesto of sorts with his picture on Instagram that was posted after the attack began. Officials haven’t yet ruled out that it was something either he posted during the attack or had instructed an accomplice to post should he be killed. 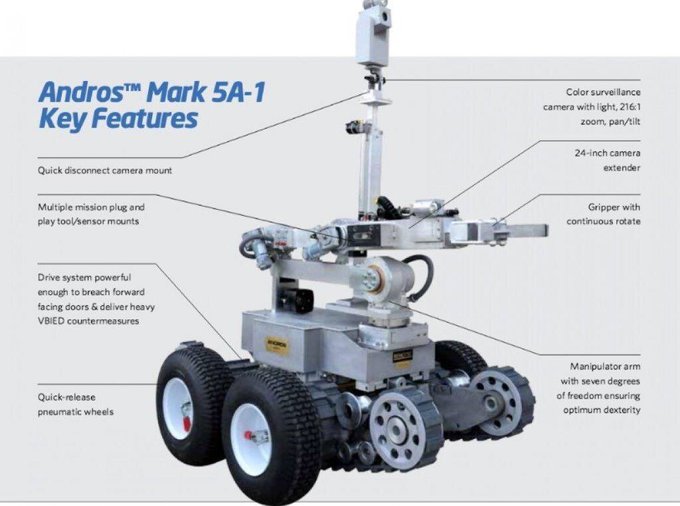 This is the kind of robot used to kill the Dallas shooter. These are typically used to blow up suspicious packages.

When POC have become “suspicious packages” rather than civilians with rights, the rules of engagement have changed and suppressing threats may have escalated with potentially hazardous collateral effects (see CHP practice of shooting at moving vehicles).

In the search of the house in Mesquite, officials say they found bomb-making materials, detonators, ammunition, bulletproof vests and some journal writings that suggest Johnson had been contemplating violence against police for some time. The materials suggest that the protest on Thursday night just happened to provide him with an opportunity to carry out those plans.

Law enforcement sources tell NPR that Johnson drove his mother’s car to the protest. Police and demonstrators had originally agreed that the protest would be static, in one place, but then people spontaneously started marching. This sent police scrambling ahead of them to block traffic as they went along.

Investigators say they now believe that Johnson essentially shadowed the march, driving from street to street, and then parked the car and went to higher ground where he could get a better vantage point on police. Once he was in position, he opened fire.

There’s plenty of site/event security blame to go around as it did appear that even with the presence of many open-carrying marchers, none of them were shot. That the killer needed to be neutralized there is no doubt, but as paramilitarism has spread as disproportionately as the asymmetry of profiling, there may be tragic consequences for using contain and clear tactics more common to the non-domestic war on terror. And is after-action rationalization via the media stating that the killer was “radicalized” an easier excuse to use more military rules of engagement suggesting that not much has been learned since Waco.

Is ”symbolic purging” possible, as though radicalization was like some linear version of propaganda, easily de-programmed like some cults rather than others although it would seem that it might be a fool’s errand, much like deprogramming sexual preference.

A federal judge has denied a motion by two Minnesota men convicted of plotting to go to Syria to join the Islamic State group who wanted to be evaluated by a German de-radicalization expert.

Abdirahman Daud and Guled Omar face possible life sentences after being found guilty by a jury last month. The expert’s de-radicalization program was offered to six other defendants who earlier pleaded guilty to conspiring to support a foreign terrorist organization.

U.S. District Judge Michael Davis, who pioneered use of the program, denied Daud’s and Omar’s motions on Tuesday.

The program was developed by Daniel Koehler, who works with neo-Nazis and other extremists.

KOEHLER: Well, first of all, I try to identify my risk assessment, the stage within the radicalization process, if there is any. And then I try to figure out the individual driving factors, what I call the radicalization recipe. It’s a combination of positive and negative aspects. Positive aspects like quest for significance, justice, help, poor, defend, women and children, Syria, delivering humanitarian aid. So this is a very strong positive urge. The negative aspects – lack of perspective, problems in family, problems in school, and their employment, whatever – they have not felt that they are part of a society. And these positive and negative aspects are bound together by radical ideology. www.npr.org/…

While the appointment of a monitor has some rational connection to the harm alleged in the lawsuits, officially purging the RAND/NYPD radicalization report raises questions about intentions. Certainly, no one believes that radicalization of terrorist violence has ceased to be a national concern. There is the potential for violence by white supremacists, anti-government extremists and other fanatics, and the ideology of “Islamic extremism” — the term is used by the governments of Muslim majority countries — continues to be a source of terrorist inspiration and instruction. Police intelligence operations and investigations targeting potential terrorist activity will continue, including those by the New York City Police Department. Since 9/11, the NYPD has worked with the FBI and other law enforcement agencies to foil numerous jihadist terrorist plots in New York, including two in 2015.

Moreover, the report will remain available on the Internet. Its repudiation is therefore purely symbolic, but what, exactly, is being repudiated?…

While discrimination is contrary to American values and law, the nature of the threat dictates the social geography of intelligence collection. Religion alone cannot make any community a target of the intelligence inquiries. Neither does it provide immunity from legitimate intelligence generated by leads and law enforcement investigations.

This is true throughout recent history. When the threat of terrorism came from Ku Klux Klan members and other racists responsible for bombing black churches and killing civil rights workers, intelligence efforts focused on white Southerners. When anti-Castro Cubans carried on a bombing campaign in Florida, intelligence efforts focused on the Cuban community. The same was true when authorities were dealing with Puerto Rican, Armenian and Jewish terrorists.

So the purging of this report — the repudiation, if you will — may give the plaintiffs “satisfaction” by symbolically breaking the connection between the current mayoral administration and the NYPD’s previous intelligence and investigative efforts. But its significance seems questionable. The NYPD will continue investigations to find radicalized men and women, and the purging of the report will have no bearing whatsoever on research and analysis exploring violent extremism, including within Muslim communities.

Darned symbolic purging, oh for the days of Stalin when purging really meant something. Maybe something even more symbolic needs to be deployed and will the fusion of domestic and international wars on terror now become one where the means used beyond borders comes home.

Abstract:  This Essay identifies and elaborates two complications raised by Robert Post’s Democracy, Expertise, and Academic Freedom, and in doing so attempts to show how Post’s theory can account for constitutional protection of the press.The first complication is a potential circularity arising from the relationships between the concepts of democratic legitimation, public discourse, and protected social practices. Democratic legitimation predicates First Amendment coverage on participation in public discourse, whose boundaries are defined as those social practices necessary for the formation of public opinion. But close examination of the relationships between these three concepts raises the question of whether public discourse and social practices can do any analytic work independent of the value of democratic legitimation, or instead are simply labels for speech that furthers it. Consideration of the press helps to illuminate the problem and a potential solution.The second complication is the interface between expert knowledge and public discourse. Post’s theory of democratic competence convincingly explains how such knowledge is created and circulated outside of public discourse. But in order to inform self-governance, expert knowledge must ultimately be disseminated into public discourse. The theory does not yet account for how this happens, nor how such expert knowledge can serve an informative function, given that public discourse transmutes claims of expert knowledge into statements of opinion. Again, the press serves as an illustrative and important example.

And then there’s the possibility that public discourse by social movements could be decapitated with similarly extreme prejudice:

5 Responses to Expert Discourse and using IEDs to “neutralize threats”