Like the urban legend of the choking dog with the thief’s fingers lodged in his throat, God-Emperor Trump has Heimliched himself with his usual(sic) lies.

Did Trump admit to felony obstruction of justice on NBC? https://t.co/kLsRih4I4J via @wordpressdotcom 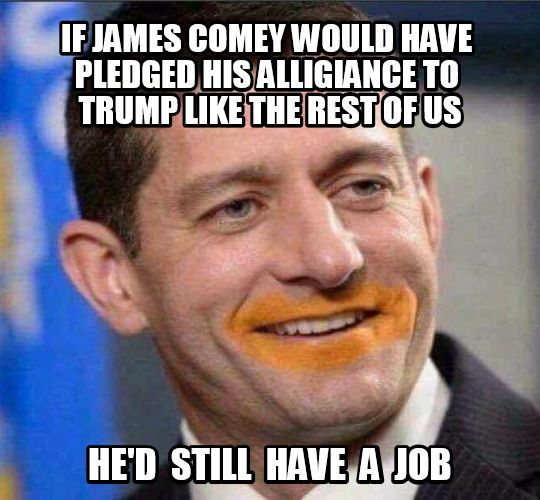 We now reached the beginning of a foreseeable end to the long national nightmare, if only the check and balances of a sane democracy can reclaim some vestige of stability from Lord Dampnut.

Personal fealty and abusing power are not features of a modern democracy. Trump’s hubris has apparently triumphed. King Leer must step down. 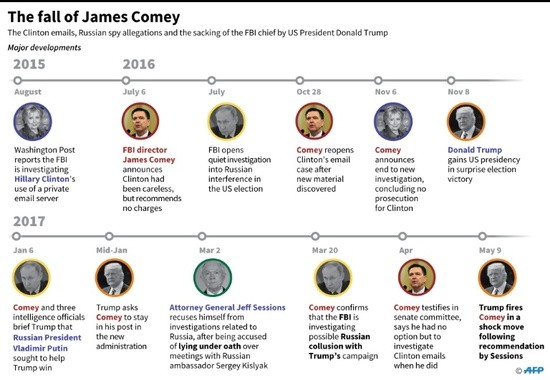 This is interesting from Harvard Law’s @tribelaw. POTUS created opening for Congress to get details on his private convos with Comey. https://t.co/yocA5WDZHo

Absolutely. Trump now can’t invoke exec priv to stop Comey from testifying in Cong or a court to what he & Trump actually said to each other https://t.co/LDlM5A9GeC

We cannot now trust any of Trump’s GOP enablers to save our Democracy. 2018 must sweep the sickness from the White House.

Even as other narcissists like Ted Cruz found their own, more doctrinaire conservatism attractive to the second-most number of 2016 RNC delegates, conventional RWNJs lost to the reality television celebrity because Trump had a less complicated, reactionary message.

Despite the ability to create a perfect storm of media disruption and terrible Democratic campaign tactics the election was won by a simplistic and absolute conservative ideology which now must be driven back into the sea by Congress and the Courts.

NEW: I appeal to the Intel Agencies of the world. Trump has enacted a coup. We need what you have on him pic.twitter.com/E0KbP8TUul

One senior White House official recently outlined the three rules of Trump for a group of reporters:

All of these rules have survived his time in office, if in slightly more modest forms. After bringing new levels of combativeness to the political process, “the only way you survive is to be combative,” Trump says now.

“I’ll read stories in the New York Times that are so one-sided. Hey, I know when I am successful. I know victory.”…

When asked directly if he feels his Administration has been too combative, he makes a brief allowance.

“It could be my fault,” he says. “I don’t want to necessarily blame, but there’s a great meanness out there that I’m surprised at.”

The inner conflict is clearly evident.

This is the same man who just a couple hours earlier had joked about former federal officials choking “like dogs.”…

European folk tale about a clumsy burglar who injures his own hand while breaking into a house. His intrusion is revealed by the discovery of one or more severed fingers
www.snopes.com/…

Is this real introspection or just more performance for his guests? The answer isn’t long in coming.

Within a day of the plates being cleared away, Trump takes to Twitter to attack “Cryin’ Chuck Schumer,” the Democratic Senate leader.

He belittles Connecticut Senator Richard Blumenthal for once misrepresenting his military service—“he cried like a baby and begged for forgiveness.”

No truce is around the corner. President Trump fights on.

Russia must be laughing up their sleeves watching as the U.S. tears itself apart over a Democrat EXCUSE for losing the election.

“to be secretly happy about or amused by something (such as someone else’s trouble).”

#lesterholt interview is the Nixon tapes + 18-minute gap on steroids: enough right there to start drafting several Articles of Impeachment.

During the Russia scandal that plagues the Trump presidency, there are also large numbers of recorded conversations that provide the equivalent of the Watergates tapes. I call them “Trump tapes”, which were legally recorded by counter-intelligence and law enforcement authorities for legitimate security and law enforcement purposes.

The eavesdropping that created these tapes was originally aimed against foreign individuals with interests that are are hostile to America, including Russian targets. The tapes would include every mention by foreign intelligence targets of every individual associated with Trump with whom they spoke…

To understand the potential political and legal time bombs that might be out there, consider the following: Every time we read a public name of a Russian individual who had some contact with anyone associated with Trump, from Russian government officials or shady characters with ties to Russian intelligence, there is an above-average probability that their conversations were recorded and emails were monitored.

If that conversation revealed that there was probable cause that the Trump associate was engaging in some form of wrongdoing, there could have been a warrant approved to eavesdrop on that Trump associate directly.

Let’s take one publicly known example: It appears from public sources that when retired General Michael Flynn talked with the Russian ambassador, some or all of those conversations were recorded. We do not know exactly what was said, but the tapes will tell the story. How, if at all, was President Trump mentioned? 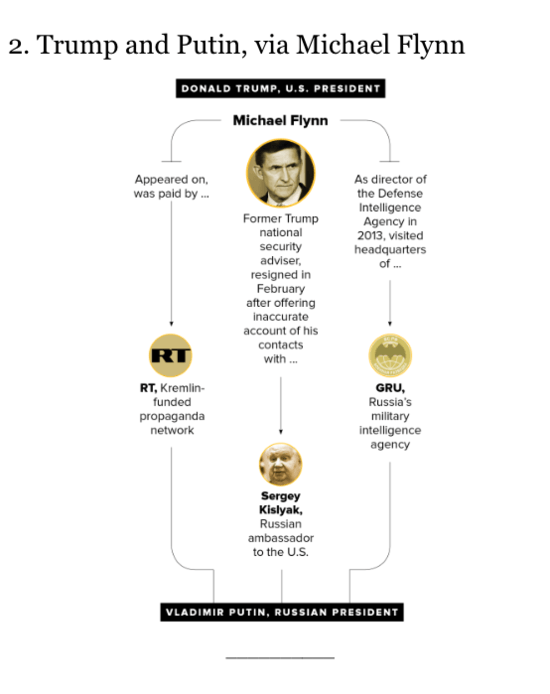 The next clip starts to play, this time showing Iowa Senator Chuck Grassley asking Clapper and former acting Attorney General Sally Yates if they ever requested that the names of Trump, his associates or members of Congress be identified by name, or unmasked, in a legal intelligence intercept. “Watch them start to choke like dogs,” Trump says, having fun. “Watch what happens. They are desperate for breath.”

As a matter of math, infinitely more evidence Comey fired for Russia investigation (some) than there is evidence Trump was wiretapped (zero) https://t.co/Fsx9uiAcjA

20 Attorneys General are calling for an independent special counsel after Trump’s firing of James Comey. pic.twitter.com/1vrXDubme3

Did he “tapp” Comey?

James Comey better hope that there are no “tapes” of our conversations before he starts leaking to the press!