The Decline and Fall of the Donald Trumpire

These new texts from Trump campaign are a lie, an incitement to unrest, an indication of upcoming purge, and a fundraising scam all at once pic.twitter.com/D6MwdnZecQ

Secession, Supremacy, and Snacks… grifting continues for the RWNJs, as hands get laid upon Trump.

More interesting for example are the US versions of a Bosnian Catholic sect, one located in Alabama, who declared in 2012 that the election of PBO, created the need for Constitutional small prayer groups that will support sovereign sheriff-controlled regions in small town enclaves, because Obama was doing the Devil’s work… of course, and there will be snacks. Last year’s Malheur Wildlife Refuge siege was a manifestation of such anti-modern, counter-hegemonic rural nativism conjoining a variety of RWNJ ideologies.

There is a lot of ideological work to be done in the coming decades, as varieties of “traditionalism” are willing to fundraise for Trumpian RWNJ actions in the name of the GOP.

Our Lady of Medjugorje is the title given to the Blessed Virgin Mary by those who believe that she appeared in 1981 to six Herzegovinian children in Medjugorje, (“None of the visionaries are nuns or priests, and they live in nice houses”)

In the early days of the Medjugorje apparitions, Our Lady revealed to the six visionaries secrets which contain information on future events. These Medjugorje secrets, we are told, will affect the Church and the world. Ominously the secrets are said to involve chastisements for the world. 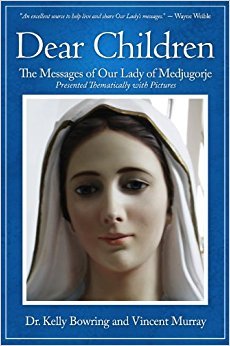 Secrets have often been a part of Marian apparitions. The most famous set of secrets or prophecies took place at Fatima in 1917. The secrets warned of World War II and communist atheism. These prophecies, have all came true.

What is not so well known is that the Blessed Mother told the world that Fatima is directly connected to Medjugorje.

ABOARD THE PAPAL PLANE (Reuters) – Pope Francis has voiced serious doubt about the authenticity of alleged continuing apparitions of the Madonna in Medjugorje, a once-obscure village in Bosnia boosted by the pilgrim business.

“These presumed apparitions don’t have a lot of value. This I say as a personal opinion,” he told reporters on his plane returning on Saturday night from Portugal where he gave the Catholic Church two new child saints.

Six children first reported visions of the Virgin Mary in 1981 in a scenario reminiscent of famous apparitions in the French town of Lourdes in the 19th century and 100 years ago in Fatima, which Francis visited on Friday and Saturday.

In the following years, the Bosnian village became a major pilgrimage site, giving many visitors a renewed sense of spirituality and locals a steady source of much-needed revenue.

It also became the focus of controversy as local Franciscan priests running the site promoted their claims in such open defiance of warnings from the Vatican that some were expelled from the order and the local bishop called them schismatic.

Bannonism traffics in these traditionalisms and their doctrinal conflicts.

The SSPX was also accused of anti-Semitism in a 2006 report on Traditionalist Catholicism published by the American Southern Poverty Law Center. Defenders of the SSPX have strongly criticised the report and accused the SPLC of using accusations of anti-Semitism as a means of “silencing opponents of liberalism.”[31]

Prominent members of the SSPX, including Lefebvre himself, have, at various times, expressed approval or support for a restoration of an absolutist French monarchy; the Vichy government (1940–1944); and the party of Jean-Marie le Pen.

You are making a tendency a requirement. Most Knights of Columbus support Trump. Only REQUIREMENT is be male and Catholic. https://t.co/qQYC149WmN

“One of the greater deceptions of Modernity is that multiculturalism and cosmopolitanism are synonymous with “diversity”. This could not be further from the truth. We not only seek to build relationships with students of diverse ethnic and religious backgrounds, but to empower them with the moral support, intellectual foundations, and resources to protect their heritage and identity from the culturally alienated and spiritually bankrupt future that awaits all those who embrace secularism, moral relativism, and globalism.” www.tradyouth.org/…

The millennial, urban version of Bundyist sovereign-citizen thought could be seen in the anti-modern traditionalists (anti-antifa, proud boy(sic) racist reactionaries).

Think about how MRAs believe they’re victims of feminism that’s somehow state-sanctioned or the need for HeteroPride parades, etc.

In the traditionalist ideological position, “homosexuals can live with their tribe” but shouldn’t be allowed to co-exist with traditionalists because some authoritarian “liberal” state enforces coexistence by legislating diversity. Note how this resembles the “separate, but equal” development theories of apartheid. This is that RWNJ talking point of separatist-secessionism rather than racial-supremacy.

More fascinating is how anti-democratic and racist society can be rationalized in the name of some apocalyptic vision of history. More interesting is how America First nativism romanticizes as a kind of anti-modernism, the segregated society of the Interwar period and its less-regulated state. Embedded in this foolishness is a fantasy of another World War.

The examples of far-right Americans praising the Kremlin are as myriad as they are obvious. For Richard Spencer, the coiner of the term “Alt-Right” and a leader of the emerging white nationalist faction it represents, Russia is both the “sole” and “most powerful white power in the world.” Matthew Heimbach, head of the white nationalist Traditionalist Worker Party—and someone who, like Spencer, desires the creation of a whites-only nation-state within the U.S.—believes Russian President Vladimir Putin is the “leader of the free world,” one who has helped morph Russia into an “axis for nationalists.” Harold Covington, the white supremacist head of the secessionist Northwest Front, recently described Russia as the “last great White empire.” And former Ku Klux Klan Imperial Wizard David Duke has said he believes Russia holds the “key to white survival.”

ÃÂ£ÃÂÃÂ°! My report on Moscow’s relations with the US’s far-right is now up: https://t.co/xNrHpkcFUx pic.twitter.com/EJV4E2tuwQ

Of course, the idea of Russia as some sort of “white empire” is, to an extent, merely a fantasy held by American and European white supremacists. Not only does Russia routinely jail and sideline the most outspoken members of its domestic white supremacist movements, but Putin routinely offers support to Russia’s ethnic and religious minority communities when it suits his political aims.

Nonetheless, over the past few years the Kremlin has increased both rhetorical and financial support for far-right movements across the West, including in the U.S. These movements encompass a wide range of right-wing ideologies, such as the white nationalists who have seen Kremlin-tied organizations provide everything from official backing to logistical support for trans-Atlantic networking in order to bring like-minded bigots together. The Kremlin, through financing and conferences, has also built up ties with America’s Religious Right, whose leaders, despite rejecting the overtly race-based visions of individuals like Spencer, share white nationalists’ admiration for Russia’s authoritarian ruler.

It will be fascinating to see how the authors of a “spiritual biography” of Donald Trump approach their subject https://t.co/HsMRs7eEDN

2 Responses to The Decline and Fall of the Donald Trumpire