Trump, no country bump-stock… could kill the trifecta of the axis of evil, unless #TrumpRussia drops a couple of bombshells

Desperate authoritarians do desperate things, and the time before the Trump administration is removed or removes itself from office will perhaps be the most challenging since the Cuban missile crisis.

Recall that the real consequence in the latter case was greater resolve in terms of the later Soviet role in the Vietnam War of which we’re reminded in the recent Burns and Novick film.

Similarly, a North Korean military action will have an effect on Iranian confrontations even as the usual suspects attempt to complete the destruction of the “Axis of Evil”. 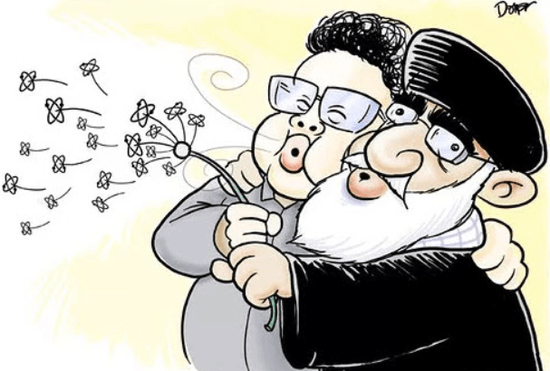 Note the role of Tom “Lando” Cotton in continuing the foolishness of playing a dangerous game in West Asia, simply to drive profits and exact revenge for CIA misadventures in the 1950s. “Can-Kicking” is always more intriguing and perhaps safer than a Domino Theory repurposed to fit the GWOT. Cotton seems to believe that history’s road ends, let’s hope not, since the likelihood will be even greater devastation.

Imagine that during whatever next round of military action, that those “orphaned” Russian sanctions will get lifted … because suddenly they’ve become an ally— this is the subtext of how the US was probably supposed to cooperate(sic) with Russia in Syria.

I have been advised by leaders of our allies in the Middle East that they expect Iran to turn up the heat in their countries. They have all still said they’re willing to bear that because they view the stakes as so high.

I’d much rather confront this threat when Iran is a weak and still somewhat isolated country in 2018 than in 2025 or 2030, when they have nuclear-weapons capacity or the ability to break out in a matter of weeks. That’s just the simple case.

Western democracies have a strategic deficit in which they always underestimate the threats they face and they’re always willing to kick the can down the road. Eventually you run out of road, as we see in North Korea.

I’m certain that I do not want to see Iran go down the path that North Korea has gone.

Remember that screwing with imposing sanctions regimes is also about trying to make some actors regional or otherwise, more profitable over others.

It’s worth your time to watch the recent broadcast of this Frontline TV program on North Korea and more specifically on the VX nerve gas assassination of Kim Jong-Un’s half brother.

It provides important insight on how the DPRK-USA nuclear weapons soap opera will become detergent agitation sooner than we think as Agent Orange needs that dog-wagging as #TrumpRussia closes in. There may be bombs before media bombshells.

The explicit insight is that the dynastic succession of power is not that different or any less moronic than what is going on presently in DC. The crimes of Jarvanka become more understandable in the context of ruling class behaviors regardless of the nation.

Trump insiders complain anonymously, but then go along with his agenda anyway. https://t.co/VTwLKYtBMJ pic.twitter.com/UMDIPXS3w4

Dunford, last week: Ã¢ÂÂIran is adhering toÃ¢ÂÂ deal
Mattis, this week: Ã¢ÂÂyesÃ¢ÂÂ in US national security interest to keep Iran Deal
Trump, next week: Deal not in the national interest of the UShttps://t.co/1sAI8C78KU

Worth remembering that @SenTomCotton wrote to the Supreme Leader of Iran hoping they could work together to kill the deal. https://t.co/1eBxYAfkui

Trump could have not mentioned the Senate Intelligence Committee but Trumpian logic suggests that he hopes that its results could be called fake.

A secondary effect has been that Mueller’s inquiry has benefited in how its scope has expanded, regardless of how the GOP members of the committee are attempting to spin its progress, including a discrediting of only parts of the Steele Dossier.

Senate intelligence committee: We have corroborated some of the Steele dossier. https://t.co/UjetKMP44T via @nbcnews

MARK WARNER says Facebook should release the ads bought by Russians: “I think at end of day itÃ¢ÂÂs important that the public sees these ads”

Russian propaganda may have been shared hundreds of millions of times, new research says https://t.co/P23LOLwgnd

A reminder that fake news is also a problem on Twitter: Facebook gets a lot of the blame, but Twitter users in swing state Michigan shared more “junk news,” “links to unverified WikiLeaks content, and Russian-origin news stories” from November 1–10, 2016 than they did professional news content, according to an Oxford study out this week. (One limitation: The 138,686 tweets by Michigan-based users that the researchers looked at all included some relevant hashtag, and “tweets about the US Presidential Election by individuals in Michigan who did not use one of these hashtags would not have been captured.” Trump-related hashtags, like #CrookedHillary, #DrainTheSwamp, and #lockherup, were used more than twice as often as Clinton-related hashtags like #Clinton, #ImWithHer, and, uh, #factcheck.) Here’s a handy chart from the Financial Times, which covered the research www.niemanlab.org/…

NYMag: President Trump would prefer the Senate Intelligence Committee investigate the media instead of him https://t.co/0yvOKc7mkL

The president initially viewed Mr. Tillerson as a granite-jawed cabinet secretary who fit Mr. Trump’s requirement that top advisers look as if they came out of “central casting,” as he has put it. Mr. Trump regularly boasted about hiring the head of the world’s largest corporation — and in the presence of a profoundly uncomfortable Mr. Tillerson, whom the president for months referred to as “Mr. Exxon.”(NY Times)

#TrumpIsAMoron… No, he’s not a moron, he’s a flipping moron