The Carvers of Ripon 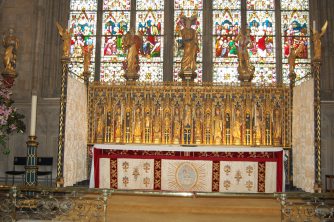 What remains of my family in the U.K. is spread rather far and wide. What this means in practical terms, is that if I want visit them all in one trip, I have some long drives ahead of me.

One day, I found myself heading south from Durham. The sky was that kind of robin’s egg blue that you get in late Spring, and the fluffy white clouds could have been arranged by Constable. As I gently cruised down the Great North Road in North Yorkshire, I saw a brown ‘tourist’ sign by the side of the road, pointing in the direction of Ripon, with a symbol for a church on it. Those of you who know me have worked out by now that I have a passion for ecclesiastical architecture. I am obviously not in the class of Sir Nikolaus Pevsner or Sir John Betjeman, but I really do enjoy the complexity and scale of church buildings.

Parking my rented Volkswagen, I walked towards the imposing bulk of Ripon Cathedral. It seems solid, permanent, as if grown out of the earth, and it takes a leap of faith to realize that this is the FOURTH church to sit on this site. St Wilfred (634-709 CE), the ‘victor’ at the Synod of Whitby in 664 CE, built churches all over what was the Kingdom of Northumbria, but erected a most impressive stone church at the Saxon community of Inhrypum – later to become the city of Ripon – in 672 CE to replace, it is surmised, an even earlier structure. This was destroyed in a dispute between the natives of Northumbria and King Eadred, who had the church burnt in 948 CE.

Just over one hundred years later, after the Norman Conquest, the whole of the North rebelled against the rule of William the Conqueror, and he undertook what became known as ‘The Harrying of the North’, when his forces laid waste to the land. The church was once again destroyed, this time in 1069 (although the Saxon crypt survived). William appointed a fellow Norman as Archbishop of York (which diocese covered Ripon at the time), one Thomas of Bayeux. Starting from scratch, Thomas caused a massive 12th century Minster to rise on the flat Yorkshire plain.

On entering what is now Ripon Cathedral (created a See in 1836), the initial impression is one of light, and relative simplicity. Admittedly, the Victorian ‘rebuilders’ have been here before us – and, goodness knows, they have created havoc elsewhere – but there are surprising touches, such as the bronze Art Nouveau pulpit, supported on marble columns. However, what draws the eye immediately are the choir stalls. These Mediaeval gems had their canopies severely damaged when the spire over the central tower collapsed in 1660, and fell through the roof. The canopies were replaced by Victorian copies in the 19th century.

These choir stalls are without doubt one of the finest examples of Mediaeval carving that survives in England. Shortly after the Wars of the Roses finished in 1485, it became possible for craftsmen to, once again, travel around the country seeking work. Under King Henry VII, the first of the Tudor dynasty, there was to be relative peace. William Bromflet (later known as William Carver) was the head of a band of rustic woodworkers known as the School of Ripon; these carvers were responsible for the misericords at the nearby Beverley Minster and also those at Manchester Cathedral.

A misericord is a decorative small seat or ledge, often carved with whimsical scenes or fantastic figures, which is located underneath the ‘tip-up’ seats of the choir stalls. Since those in the choir will be seated for parts of the service and standing for others, they were afforded the ‘comfort’ of a misericord, to ease the load, so to speak, during long services.

The rest of the choir stalls – in beautiful oak – are carved with a similarly joyful touch. Here you can see the carving at the bench end of the stalls on the south of the choir. The figure at the top is of an elephant carrying a most fanciful howdah. Since the arrival of the first elephant in England, in 43 CE – brought by the Emperor Claudius – the animal has induced awe. In 1255 King Louis of France gave his fellow monarch, King Henry III, an elephant for the menagerie in what had been the moat at the Tower of London. A writer of the period, Matthew Paris, had produced a manuscript which showed an elephant carrying a howdah. Unfortunately, the general belief was that elephants could carry ‘stone castles’ with armed men on their back – just as you can see in the carving!

In front of the elephant is a kneeling centaur. These fanciful beasts, half man, half horse, had their roots in Greek mythology. In some cases they are described as being wise teachers (rather like those depicted in ‘The Chronicles of Narnia’) and in other situations are fierce warriors. This one is shown carrying an axe and a round shield. Unfortunately, his arm has suffered some damage, as his right hand and part of his lower arm is missing.

Above the stall is an heraldic achievement, that is a shield and its accompanying adjuncts (many people would refer to this as a ‘coat of arms’; this term – in this case – is incorrect) It is normally difficult to blazon an achievement when you can only see half of it, but in this instance it is relatively easy to deduce – since we can see a bishop’s mitre, a paschal lamb, and saltire bearing golden keys, this must signify the Bishop of Ripon and Leeds – that and the small ‘Reserved’ sign on the seat below!

What of William Bromflet, you say? Well, he did rather well for himself. Of the three ‘hands’ identified in the Ripon carvings (Hands A, B and C), ‘Hand A’ is responsible for the whole of the south choir stalls – and it is likely his. William was being paid 6 pence a day at this time, Christopher Bromflet the same, Ranulf Bromflet 4 pence, and Robert Dowyer and Radulf Turrett 4 pence also. William became famous for his carving, and was elected ‘Wakeman’ (equivalent to a modern day mayor) of Ripon in 1511.

Oh, and one more thing. A rural clergyman, one Charles Dodgson, was once made a Canon of Ripon Cathedral. It is said that his eldest son, a certain Charles Lutwidge Dodgson, was much influenced by the whimsical creatures carved into the woodwork of the choir stalls. You might know him better by his pen name – Lewis Carroll.

Ripon Cathedral is a wonderfully peaceful place, and whatever your faith – or even if you profess none – the art and beauty contained within is manna to the soul.

British, now living in the USA; aviation specialist, but with generalist leanings. Victorian literature, geography and the state of the world (not necessarily in that order) keep me up late at nights.
View all posts by shortfinals →
This entry was posted in architecture, England and tagged architecture, church, MIddle Ages, Ripon Cathedral, woodcarving. Bookmark the permalink.

5 Responses to The Carvers of Ripon