The Basilisk Lizard (Basiliscus basiliscus) has been dubbed ‘The Jesus Christ Lizard’ because it can run short distances on the surface of water when escaping from predators.

The Greater Wax Moth (Galleria mellonella) developed the most acute hearing ever recorded by scientists, a range that extends past that of Bats, it most common predator, to better enable it to avoid being gobbled up.

African Elephants have over twice as many olfactory genes as indomestic dogs, and five times more than in humans, beating out rats, the previous record-holders, so they can smell water and trouble like grassfires over great distances.

As humans have developed ever more complex and heavily populated societies, we have also developed odd survival skills: the wry jest in the face of disaster, an appreciation of irony and the nonsensical, and dark ‘gallows’ humor in the face of death.

Here are some poets who certainly know all about humor as a survival skill.

This poet is really some anonymous authors of antique fairy tales and nursery rhymes collected in the 1760s. 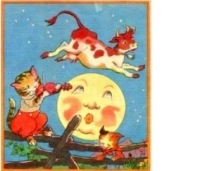 Hey, diddle, diddle,
The cat and the fiddle,
The cow jumped over the moon;

The little dog laughed
To see such sport,
And the dish ran away with the spoon.

These verses clearly had an effect our next, very popular poet, as we can see in his best-known poem:

The Owl and The Pussy-Cat

The Owl and the Pussy-Cat went to sea
In a beautiful pea green boat,
They took some honey, and plenty of money,
Wrapped up in a five pound note.
The Owl looked up to the stars above,
And sang to a small guitar,
‘O lovely Pussy! O Pussy my love,
What a beautiful Pussy you are,
You are,
You are! 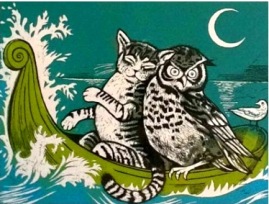 What a beautiful Pussy you are!’

Another nonsensical poet whose verses have been very popular.

I never saw a Purple Cow,
I never hope to see one,
But I can tell you, anyhow,
I’d rather see than be one!

The Roof it has a Lazy Time
A-Lying in the Sun;
The Walls, they have to Hold Him Up;
They do Not Have Much Fun.

Here’s a sampling from the Empress of Ironic Verse:

Should Heaven send me any son,
I hope he’s not like Tennyson.
I’d rather have him play a fiddle
Than rise and bow and speak an idyll. 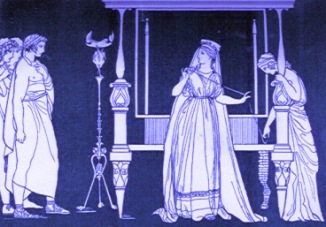 In the pathway of the sun,
In the footsteps of the breeze,
Where the world and sky are one,
He shall ride the silver seas,
He shall cut the glittering wave.
I shall sit at home, and rock;
Rise, to heed a neighbor’s knock;
Brew my tea, and snip my thread;
Bleach the linen for my bed.
They will call him brave.

Razors pain you;
Rivers are damp;
Acids stain you;
And drugs cause cramp.
Guns aren’t lawful;
Nooses give;
Gas smells awful;
You might as well live.

This poet is always aware of what’s really happening, no matter how politely it may be covered over.

I know I am
The Negro Problem
Being wined and dined,
Answering the usual questions
That come to white mind
Which seeks demurely
To Probe in polite way
The why and wherewithal
Of darkness U.S.A.— 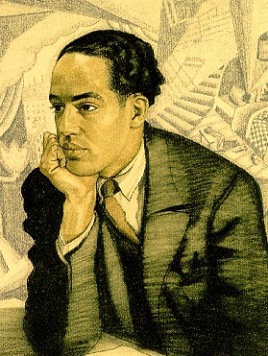 Wondering how things got this way
In current democratic night,
Murmuring gently
Over fraises du bois,
“I’m so ashamed of being white.”

The lobster is delicious,
The wine divine,
And center of attention
At the damask table, mine.
To be a Problem on
Park Avenue at eight
Is not so bad.
Solutions to the Problem,
Of course, wait.

Some People have pigeon-holed this prolific poet as a ‘Children’s Author.’ Some People could be missing a lot of what he’s saying.

I made myself a snowball
As perfect as could be.
I thought I’d keep it as a pet
And let it sleep with me.
I made it some pajamas
And a pillow for its head.
Then last night it ran away,
But first—it wet the bed.

– from Every Thing On It 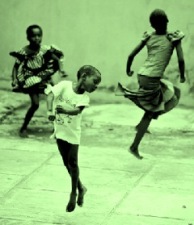 Draw a crazy picture,
Write a nutty poem,
Sing a mumble-gumble song,
Whistle through your comb.
Do a loony-goony dance
‘Cross the kitchen floor,
Put something silly in the world
That ain’t been there before.

– from A Light in the Attic

The Yesees said yes to anything
That anyone suggested.

The Noees said no to everything
Unless it was proven and tested.
So the Yesees all died of much too much
And the Noees all died of fright,
But somehow I think the Thinkforyourselfees
All came out all right.

– from Every Thing On It

Coping with our insecurities by making light of them is certainly a necessary survival skill.

For the One Man Who Likes My Thighs

There was the expensive cream from France
that promised the dimples would vanish
if applied nightly to the problem spots.
Then, when that didn’t work, Kiko, the masseuse
at Profile Health Spa, dug her thumbs
deep into my flesh as she explained
in quasi-scientific terms that her rough hands
could break up the toughest globules of cellulite.
I screamed, then bruised over, but nothing
else happened. When they healed, my legs still looked
like tapioca pudding. There was the rolling pin method
I tried as far back as seventh grade,
kneading my lumpy legs as though I was making bread.
Cottage Cheese Knees, Thunder Thighs —
I heard it all — under the guise of teasing,
under the leaky umbrella mistaken for affection.
I learned to choose long dresses
and dark woolen tights, clam diggers instead of short-shorts,
and, when I could get away with it, skirted bathing suits.
The nutritionist said that maybe Royal Jelly tablets
would break up the fat. I drank eight glasses
of water everyday for a month. I ate nothing
but steak for a week. I had to take everyone’s advice,
fearing that if I didn’t, my thighs
would truly be all my own fault. Liposuction
cost too much. The foil sweat-it-out
shorts advertised in the back of Redbook
didn’t work. Swimming, walking in place, leg lifts.
It’s embarrassing, especially being a feminist.
I wondered if Andrea Dworkin had stopped worrying,
and how. If Gloria Steinem does aerobics,
claiming it’s just for her own enjoyment.
Then I read in a self-help book:
if you learn to appreciate your thighs, they’ll appreciate
you back. Though it wasn’t romance at first sight,
I did try to thank my legs for carrying me up nine flights
the day when the elevator at work was out;
for their quick sprint that propelled me
through the closing doors of the subway
so that I wouldn’t be late for a movie;
for supporting my nieces who straddled, one
on each thigh, their heads burrowing deep into my lap.
I think, in fact, that it was at that moment
of being an aunt I forgot for an instant
about my thigh dilemma and began, more fully,
as they say, enjoying my life. So when it happened later
that I fell in love, and as a bonus,
the man said he liked my thighs, I shouldn’t have been
so thoroughly surprised. At first I was sure I’d misheard — 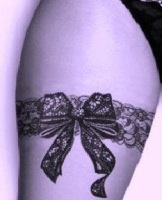 that he liked my eyes, that he had heard someone else sigh,
or that maybe he was having a craving for french fries.
And it wasn’t very easy to nonchalantly say oh, thanks
after I’d made him repeat. I kept asking
if he was sure, then waiting for a punch
line of some mean-spirited thigh-related joke.
I ran my fingers over his calf, brown and firm,
with beautiful muscles waving down the back.
It made no sense the way love makes no sense.
Then it made all the sense in the world.

With great change upon us,weighty issues hopelessly knotted, and uncertainty that our air and water will last through the next generation – it’s time to remember that jokes and irony have often helped us through the worst of times before. 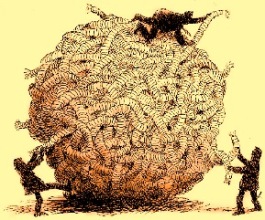 Nona Blyth Cloud has lived and worked in the Los Angeles area for the past 50 years, spending much of that time commuting on the 405 Freeway. After Hollywood failed to appreciate her genius for acting and directing, she began a second career managing non-profits, from which she has retired. Nona has now resumed writing whatever comes into her head, instead of reports and pleas for funding. She lives in a small house overrun by books with her wonderful husband.
View all posts by wordcloud9 →
This entry was posted in Poetry, Word Cloud and tagged Denise Duhamel, Dorothy Parker, Edward Lear, Gelett Burgess, Jocund, Langston Hughes, Mother Goose, Shel Silverstein. Bookmark the permalink.
Loading Comments...
%d bloggers like this: