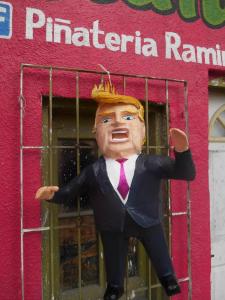 Last week, when narcissist, real estate magnate, and reality TV star Donald Trump declared that he was running for president, he said that the United States had become “a dumping ground for everybody else’s problems.” He accused the Mexicans who were coming into the United States of being criminals and rapists. He also claimed that they were bringing drugs into this country. The pompous bloviator promised to build a Great Wall on the nation’s southern border.

Trump said, “When Mexico sends its people, they’re not sending their best. They’re sending people that have lots of problems, and they’re bringing those problems with us. They’re bringing drugs. They’re bringing crime. They’re rapists. And some, I assume, are good people.” He claimed that he had spoken with border guards who told him that’s what our country was getting from south of the border.

After hearing what Trump had to say about Mexicans, Dalton Javier Avalos Ramirez, a craftsman from the Mexican state of Tamaulipas, decided to give people a way to beat up on “The Donald”–and receive candy as a reward. Ramirez told The Independent that after listening to  what Trump had to say when he announced his candidacy, he was inspired to create a Donald Trump piñata. He reportedly completed the task in a single day.

According to the Associated Press, Ramirez’s Donald Trump papier-mache figure will come in a variety of sizes. Ramirez said that he created the Trump piñata “because of the hatred Trump expressed for the Mexican people.” The Mexican craftsman added that “the piñatas provide an outlet for Mexicans to vent their frustrations at Mr Trump’s controversial portrayal of Mexicans.” Ramirez said that Mexican people are angry and want to burn and break the Donald Trump piñatas.

I’d like to do the same thing to the flesh-and-blood Trump–but I’m a non-violent person. I think I’m gonna get me one of them piñatas.

This Just In: Univision has announced “that the network was ending its relationship with him.” A Univision statement said: “At Univision, we see first-hand the work ethic, love for family, strong religious values and the important role Mexican immigrants and Mexican-Americans have had and will continue to have in building the future of our country.”

Now “The Donald” is vowing to sue Univision for canceling the Miss USA Pageant.