A guid New Year to ane an` a` and mony may ye see!

New Year’s Eve is celebrated around the world, but in Scotland, it’s called Hogmanay.

For about 400 years, from the end of the 17th century all the way to the 1950s, celebrations and festivities at Christmas were effectively banned in Scotland because they were considered “Popish” or Catholic by the Kirk (the Church of Scotland), especially during the Protestant Reformation. Many Scots had to work over Christmas. Their winter solstice holiday was at New Year when family and friends gathered for a party and to exchange presents, especially for the children, all the night of December 31, until before dawn on January 1.

The house was cleaned on December 31, especially removing the ashes from the old year’s fires, and there was also a superstition about clearing all your debts before “the bells” at midnight. Hospitality was offered to friends and strangers.

Immediately after midnight, everyone would be singing Robert Burns’ “For Auld Lang Syne,” which of course has become a popular custom outside of Scotland as well. Burns claimed it was based on an earlier fragment and certainly the tune was in print over 80 years before he published his version in 1788.

One of the older traditions, “First footing” (that is, the “first foot” in the house after midnight) is not as common as it used to be. To ensure good luck for the house, the first foot would be male and dark (possibly a throwback to Viking days when blond strangers arriving on your doorstep meant trouble). He brought symbolic coal, shortbread, salt, black bun and whisky. These days, usually the gift is whisky, and sometimes shortbread, if a “first foot” should come to the house. 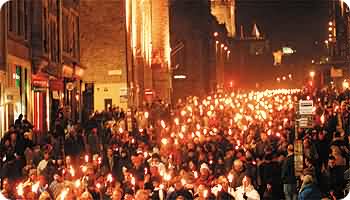 Fireworks displays and torchlight processions in Edinburgh – and many other Scottish cities – are reminders of ancient customs dating far back into the pagan past.

One of the most spectacular Fire ceremonies takes place in Stonehaven, just south of Aberdeen. Giant fireballs, weighing up to 20 pounds are lit and swung around on five foot long metal poles, requiring 60 men to carry them marching up and down the High Street. The origin of this pre-Christian custom is believed to be rooted in the Winter Solstice, with the fireballs as symbols of the sun’s power to purify the world, consuming evil spirits in the flames.

The second day of January is also a holiday in Scotland — time to recover from a week of merry-making and celebration.

Down on her hands and knees
at ten at night on Hogmanay,
my mother still giving it elbowgrease
jiffywaxing the vinolay. (This is too
ordinary to be nostalgia.) On the kitchen table
a newly opened tin of sockeye salmon.
Though we do not expect anyone,
the slab of black bun,
petticoat-tails fanned out
on bone china.
‘Last year it was very quiet…’

Mum’s got her rollers in with waveset
and her well-pressed good dress
slack across the candlewick upstairs.
Nearly half-ten already and her not shifted!
If we’re to even hope to prosper
this midnight must find us
how we would like to be.
A new view of Scotland
with a dangling calendar
is propped under last year’s,
ready to take its place.

Darling, it’s thirty years since
anybody was able to trick me,
December thirty-first, into
‘looking into a mirror to see a lassie
wi as minny heids as days in the year’ –
and two already since,
familiar strangers at a party,
we did not know that we were
the happiness we wished each other
when the Bells went, did we?

All over the city
off-licenses pull down their shutters,
people make for where they want to be
to bring the new year in.
In highrises and tenements
sunburst clocks tick
on dusted mantelshelves.
Everyone puts on their best spread of plenty
(for to even hope to prosper
this midnight must find us
how we would like to be).
So there’s a bottle of sickly liqueur
among the booze in the alcove,
golden crusts on steak pies
like quilts on a double bed.
And this is where we live.
There is no time like the
present for a kiss.

So here’s to a fine start to the New Year, however you’ve been celebrating it. May your New Years hopes and dreams come true in 2016.

Nona Blyth Cloud has lived and worked in the Los Angeles area for the past 50 years, spending much of that time commuting on the 405 Freeway. After Hollywood failed to appreciate her genius for acting and directing, she began a second career managing non-profits, from which she has retired. Nona has now resumed writing whatever comes into her head, instead of reports and pleas for funding. She lives in a small house overrun by books with her wonderful husband.
View all posts by wordcloud9 →
This entry was posted in History, Mythology, Poetry, Religion, Scotland and tagged Church of Scotland, Hogmanay, Liz Lockhead, New Years, Pagans. Bookmark the permalink.